Voice Entertainment artists Jinny Ng (吳若希) and Hana Kuk (菊梓喬) are not only labelmates but also competitors, and when Hana was announced to be the year’s Most Popular Female Singer at the Jade Solid Gold Awards held on Sunday, netizens naturally turned their focus on Jinny to see her reaction.

Long known for being Voice Entertainment’s “number one sister”, Jinny’s sudden hiatus in 2016 to give birth to her daughter has paved the way for Hana to step up. The past two years did wonders for Hana, who went from being a struggling artist to one of Hong Kong’s most well-known songwriting idols.

When Hana’s name was announced for Most Popular Female Singer, Jinny smiled brightly, clapped hard, and appeared supportive, but many netizens said they didn’t find Jinny’s reaction to be very genuine.

When Hana’s name was announced, Jinny’s face looked sour for half a second before she started smiling widely. When the camera panned to Hana hugging her labelmate Pakho Chau (周柏豪), Jinny’s face turned stiff for a split second.

This isn’t the first time that Jinny was criticized for her lack of sincerity. When Hana won “Most Popular TV Drama Song” at the TVB Anniversary Awards, Jinny congratulated Hana on her Instagram with the comment, “Congratulations to the number one sister!” Many netizens said they found Jinny’s comment sarcastic.

Nonetheless, Jinny has insisted that she is genuine in her congratulations for Hana, and that the two of them get along despite rumors of discord. 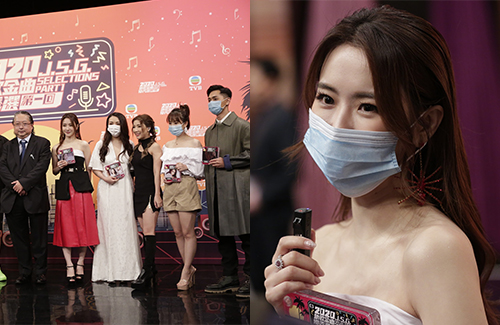