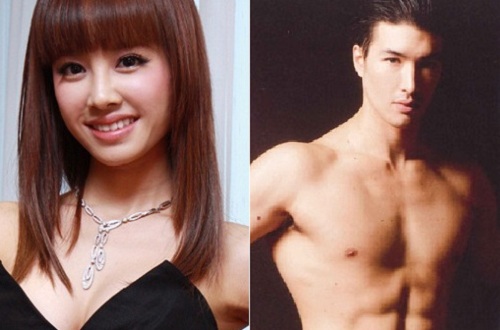 Taiwanese pop princess, Jolin Tsai (蔡依林) and Vivian Dawson’s (锦荣) romance is closely watched and mostly frowned upon. Fans and media have their reservations over their 4-year age gap, and some described Vivian as a “toy boy” for Jolin. Vivian is also a wild party animal, often spotted in the company of hot women. Even Jolin’s father had reservations over his daughter dating the 26-year-old model!

In an attempt to shed his party animal image, Vivian has been spending more time working out in gym recently. Three days before his birthday, he was exercising at the gym before celebrating his birthday with Jolin.

Last year, Jolin gave Vivian a Pandora bracelet for birthday. Fans are wondering what she would buy for her lover this year. She remained secretive about her birthday gift, and may probably want to spring her lover a wild surprise.

Vivian is infamous for his wild partying, often patronizing night clubs with hot, sexy women. Last year, he travelled to Bangkok with Hong Kong’s young model, Hidy Yu (余曉彤) and spent the night dancing away. He was also spotted in a night club with former Singaporean actress, Fiona Xie (谢宛谕) before heading for supper together. Earlier this year, he partied until wee hours in the company of Taiwanese actress, Aggie(謝沛恩). Vivian was photographed having tremendous fun together with Aggie, who tucked her hands into his pockets when crossing the street together.

Despite the negative reports on her lover, Jolin remains trusting and supportive of Vivian. Jolin even chided the press for being nosy, “You guys had nothing else better to do!”

Vivian’s efforts of kicking his partying habit and hitting the gym more frequently appeared to pay off. Jolin’s father was seen previously driving the couple around. In May, Vivian was even invited to spend Mother’s Day with Jolin’s family. It appears that Jolin’s parents have finally accepted Vivian!

Jolin had also brought Vivian to meet her good friend, Stephanie Sun (孫燕姿). He often spends time together with Jolin and her friends. Jolin kept and lover close and even allowed Vivian keys to her apartment!

With the “VJ” relationship reaching its two year anniversary, Vivian said, “I had only planned to stay in Taiwan for 3 months. I didn’t expect to stay for 2 years! ”