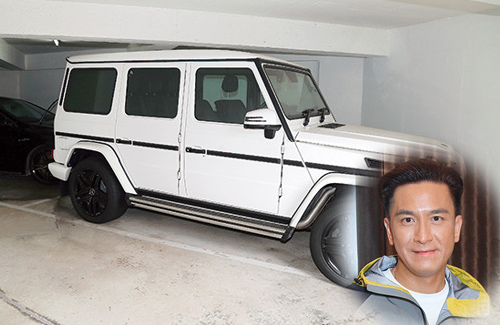 The actor continued to place two stuffed animals at the rear seat of his new SUV.

Since Jacqueline Wong‘s (黃心穎) scandal last year, 45-year-old actor Kenneth Ma (馬國明) has since admitted to breaking up with the actress. Despite being the victim of the saga, Kenneth has generously defended his ex-girlfriend whenever questioned by the media. Trading up his car recently, Kenneth appears to have kept a reminder token of good times with Jacqueline.

The twelve-time Best Actor nominee at the TVB Anniversary Awards finally got his taste of winning the big award this year when he won for Big White Duel <白色強人>. Kenneth did not forget to treat cast and crew to a meal to celebrate his triumph. While rumors that Kenneth had exchanged the accolade by inking a seven-year contract with the station, there was also talk that his apt handling of Jacqueline’s scandal won him many sympathy points.

Jacqueline, who returned to Hong Kong after eight months in the United States, also congratulated Kenneth and said, “he was long overdue for the award, given his capability.”

Acknowledging that he had received Jacqueline’s congratulatory text message and had replied “many thanks,” encouraging her to keep working hard. Offering his encouragement, he stressed that they were friends and that he wished the best for all his friends.

According to reports, Kenneth, who already owned a $840,000 HKD Mercedes-Benz, went for an impressive SUV model worth $1.1 million HKD as a new play toy, possibly to make up for feelings of emptiness.

There was talk that Kenneth has been avoiding celebrity soccer games and training matches to avoid the embarrassment of bumping into Andy Hui (許志安) despite his avid interest in the sport, thus turning his attention to cars. It was also discovered the soft-hearted actor has retained his habit of placing a pair of stuffed animals on the backseat of his car, as two tiger and pig soft toys were spotted at the rear seat of his new SUV, albeit a different pair from previously. This “symbol of love” has provoked guesses that he has yet to totally relinquish his previous romance.

Although the two have broken up, the affable actor has been speaking well of his ex-girlfriend in the media, hoping everyone could give her another chance. When Jacqueline returned to Hong Kong, Kenneth continued his gentlemanly response and even commented that her drama Handmaidens United <丫鬟大聯盟> was an enjoyable watch. However, ratings for the drama had been undeniably poor, despite Jacqueline’s attempts to publicize the drama on social media.