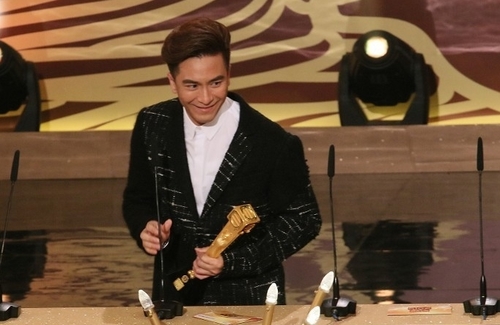 Freshly crowned TV King, Kenneth Ma (馬國明), is off to a great start in the new year thanks to his big win at the annual 2019 TVB Anniversary Awards. Having missed out on the Best Actor award 12 times despite his 21 years of loyalty to TVB, many fellow actors and fans are glad the actor finally got his much deserved recognition.

Although it was previously speculated that Kenneth is leaving TVB, the hefty award likely motivated him to renew his contract with the company. Recent reports suggest he exchanged a seven-year contract for the award, as he seemed disinterested in contract renewal earlier in the year and only renewed it just before the awards ceremony.

Kenneth has always possessed a good and well-behaved image throughout his career at TVB. A versatile actor, he has challenged himself with countless of diverse roles over the years. Playing a more charismatic character in Big White Duel <白色強人>, his portrayal of a cool and talented doctor was a huge hit among viewers, and this garnered him great support for TV King.

However, his success at work did not translate into his love life when his ex-girlfriend Jacqueline Wong’s (黃心穎) cheating scandal became the talk of the town for months. But her betrayal provoked him to become more ambitious and work harder for the Best Actor award, and he finally took home the trophy this year. With Kenneth renewing his contract, it looks like he’ll be taking advantage of the opportunities that comes with the award – viewers can look forward to seeing him in more upcoming TVB projects.