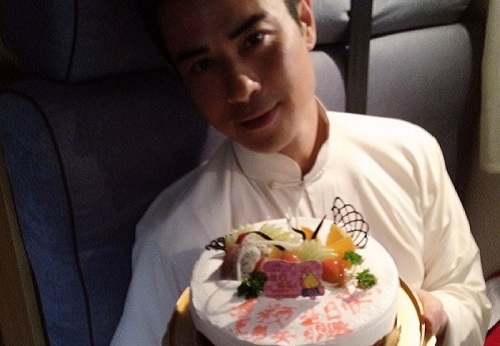 Kevin Cheng (鄭嘉穎) celebrated his 43rd birthday while surrounded by the love of 200 fans in mainland China! Despite receiving birthday wishes from many friends in the entertainment industry, Kevin’s rumored ex-flames, Niki Chow (周麗淇) and Charmaine Sheh (佘詩曼), have not sent their well wishes yet.

Portraying the titular character in mainland Chinese TV drama, Ip Man <葉問>, Kevin Cheng has been training in Wing Chun martial arts. On August 15th, Kevin set aside time from filming Ip Man to show his Wing Chun moves to his fans, who especially arrived in Kunshan, China for his birthday. Kevin his delighted fans when he shared that he will have countless topless scenes in Ip Man.

This year, Kevin’s birthday wish was not to find a girlfriend. With grand plans to open up his own production studio by next year, Kevin’s mind was only focused on work. Rumored to be pocketing $7 million RMB for his Ip Man role, Kevin hoped that he will be able to tackle the extensive martial arts scenes without injury. Due to his hectic work schedule, he cannot afford to sustain any injuries.

Kevin’s good friend, Timmy Hung (洪天明), presented him with a birthday cake. The Ip Man production crew gave Kevin a wooden stake to allow him to practice Wing Chun martial arts. Kevin had also ordered a similar stake and joked whether he can refund his birthday gift.

Kevin thanked his friends and fans for remembering him on his special day. He wrote on his Weibo blog, “Today is a very memorable birthday. Thanks to everyone who sent their birthday wishes! Especially the friends who arrived in Kunshan to celebrate my birthday with me. I hope that I can continue to celebrate with you guys in the future!”

Despite earlier reports linking Kevin to Niki Chow and Charmaine Sheh, the two women apparently have not sent their birthday greetings yet.