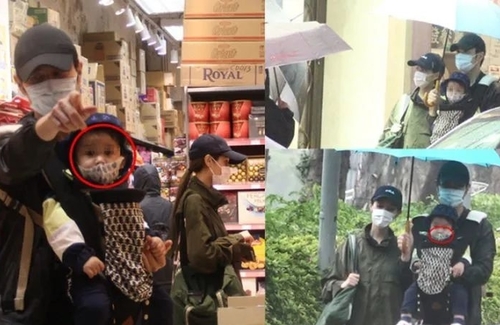 Not too long ago, the Hong Kong media encountered Kevin Cheng (鄭嘉穎) and Grace Chan (陳凱琳) with their son Rafael (鄭承悦) outside. Although the three of them all wore masks, Kevin got angry when he caught the reporter taking photos of his family. 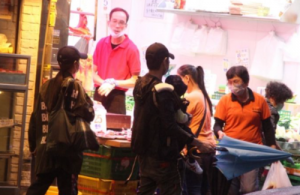 The reporter came across the trio in Causeway Bay, where Grace was browsing stores. Afterward, they walked along Victoria Park, and Kevin continued carrying Rafael in the front, as the floor was slippery from the slight drizzle. Eventually, they stopped by a bakery to buy some bread, and a fish stall to buy fish.

Although Kevin avoided walking into crowded stores and waited outside for his wife most of the time, he did not pay attention to his son’s mask. It only covered his mouth, so his nose was exposed. At the time, there were many people on the streets, so there’s a certain degree of risk involved. 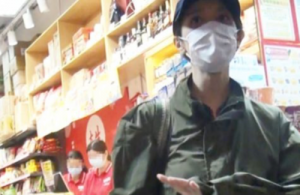 Grace hurriedly went over to the reporter and said, “Don’t take pictures when there are children present. Let’s respect each other!” before quickly leaving to catch up with her husband.

Some Hong Kong netizens criticized Kevin’s big reaction. “The child already wore a mask; you can’t see his face. You know you’re a public figure, but you still expose his face on social media regularly. The reporter is just working, it’s not easy,” a netizen expressed.

Another Internet user wrote, “Stars should be expected to be photographed when they’re outside. If no one takes pictures of them, then that’d be really sad.”

Although Kevin and Grace typically share photos of their son on social media, they might be particularly worried about Rafael’s safety during the current situation in Hong Kong.