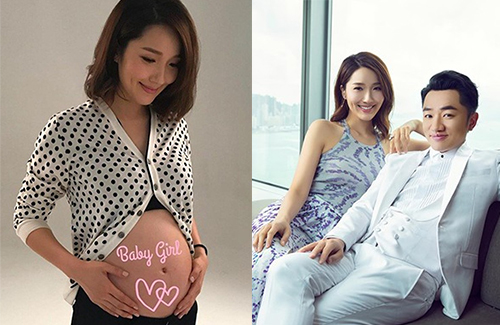 When Leanne Li (李亞男) told the press that she didn’t want her child to have Wong Cho-lam’s (王祖藍) “strong genes”, she was actually dropping a hint.

The 33-year-old former TVB actress and beauty queen married Wong Cho-lam in 2015, after dating for over five years. In July 2018, the couple finally announced that they were expecting, but they didn’t share the gender of their baby—until now.

Leanne, who is now five months pregnant, officially announced that she’s carrying a baby girl. She wrote on Facebook earlier this week, “Today, [my] little princess spent the day at work with me. She’s so well-behaved!”

Leanne was later reached out for comment. He said, “I’m very happy. I’ve always wanted a daughter first, and then a son. I still have some things left to buy, and the baby room is still being renovated. I ask nothing more but for the baby to have a safe birth and live in a healthy environment. It doesn’t matter if it’s a boy or girl, but to be honest, I do prefer having a daughter first because girls tend to stick with mothers more!”