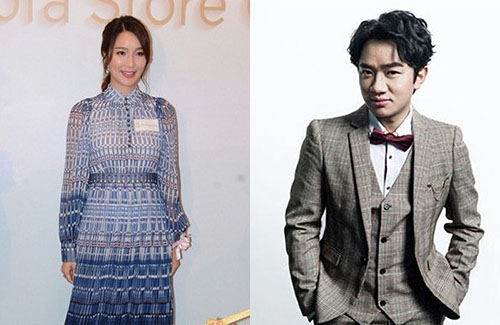 Pregnant mama Leanne Li (李亞男) is looking gorgeous and glowing when she attended the opening event for a furniture store earlier this week. Wearing a long blue dress and low heels, Leanne is prepared for the pregnancy life.

Leanne, who is four months pregnant, shared her experiences with the press. She said she hasn’t been getting morning sickness and would occasionally take a stroll down the park. Though she is considering a natural delivery, she is also afraid of pain.

“I’m really scared of pain. I’ve heard too many horror stories. After being in labor for over ten hours, many mothers still end up going under the knife. I’m rather big-boned, so I think [a natural delivery] would be easier. This is something I’m still considering.”

Asking if Wong Cho-lam (王祖藍) is a strict husband, she laughed and said, “Not very much, actually. I’ve had friends whose husbands act like their mothers!” Leanne shared that when she first felt the fetus move in her belly, she thought she was having a stomachache.