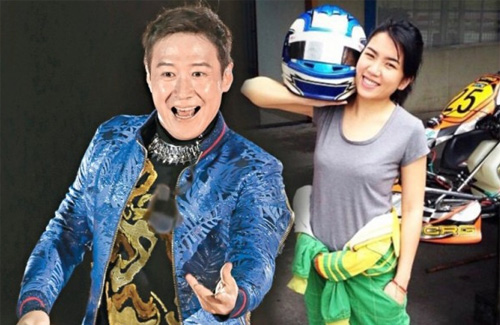 Shortly after the reveal of Leon Lai (黎明) dating his own company employee, the 51-year-old singer admitted that he will be a father. Although his girlfriend Wing was expected to deliver in May, she  has already given birth to a baby girl one month early. Since the baby was not full-term, she only weighed around five pounds during birth.

Wing has worked in Leon’s company for several years and started out as an assistant. Due to her cheerful attitude and straight forward personality, Wing caught Leon’s interest despite their 19-year-age gap. Secretly dating two years ago, the couple successfully kept their romance away from the public eye until a pregnant Wing was spotted entering Leon’s home last month.

An inside source revealed that Wing has already given birth. Leon’s close friends already know of the baby’s arrival, but did not speak to the media because they respect the couple’s private nature. Leon’s good friend, Mark Lui (雷頌德), joked, “If [Leon’s] baby was born pre-term, then he wouldn’t have time to talk to me!”

Fans joked that as Leon has finally become a father, the “Four Heavenly Kings” can now be dubbed as the “Four Father-in-Laws” since Jacky Cheung (張學友), Andy Lau (劉德華), and Aaron Kwok (郭富城) all coincidentally have daughters. Jacky was the earliest to become a father, as his wife gave birth in 2000. Andy’s daughter Hanna was born in 2012 and Aaron’s daughter Chantelle was born in 2017.

When approached by the media, Leon’s ex-wife Gaile Lok (樂基兒) commented on the baby news, “Congratulations and happy for them.”

Although he confirmed the birth of his daughter, Leon was very upset by the person who leaked the news. In a message he left on social media, Leon expressed his annoyance. “First, I’m truly grateful to the hospital’s doctors and nurses for their professionalism. However, an anonymous source leaked [the baby news] and turned the hospital into a media-infested ground! This has brought countless stress to the mothers who just delivered babies as well as other patients.”

Leon added, “Let’s wait for the hospital to return to normalcy. I’m not going to appear at the hospital again. I’ll rather use my private space to enjoy time with my family.”

Note: This article was updated on April 24, 2018 to reflect Leon Lai’s confirmation of his daughter’s arrival.