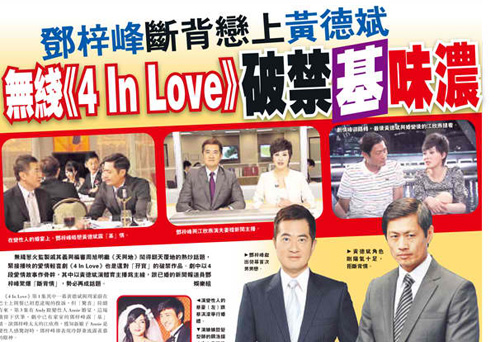 In Let It Be Love, Tang Chi Fung and Kenny Wong were former members of the Hong Kong Basketball team. Later, the friends joined the same television station and became colleagues. Chi Fung and his wife, Alvina Kong (江欣燕), later became a husband-and-wife news anchor team.  The trio were good friends. Kenny was often frustrated in love, in which he dated Janet Chow, Lee Ying Kei and Queenie Chu. Chi Fung shocked Kenny when he finally admitted that he has been secretly in love with him for many years. However, Chi Fung’s love declaration was not accepted by Kenny. Chi Fung and his wife, Alvina, will divorce, while her relationship will develop with Kenny instead.

In a telephone interview, Tang Chi Fung said, “I normally film comedies. Portraying a gay character was a major breakthrough for me! Kenny and I will not have any intimate contact, as I will only use words to express my feelings. Finally, my character will divorce Alvina Kong.” (Is this due to your homosexuality?) “No, it was due to my wife’s misunderstanding over another matter.” (Are you afraid of complaints?) “No, I hope the audience will accept my attempt to portray a new role.”

Jonathan Chik handled the exploration of homosexual love carefully in Let It Be Love, often personally monitoring the filming progress of the series. Unlike normal wild declarations of love, Chi Fung’s character revealed his feelings towards Kenny in a serious manner. In the scene, Chi Fung spoke of the love life of mature adults and thus he did not feel embarrassed while filming the scene.

Jayne: Many people expected that the Tang Chi Fung will portray a gay character in Let It Be Love, especially after his reaction in the transgender wedding scene.

26 comments to “Let It Be Love” Explores Homosexual Love