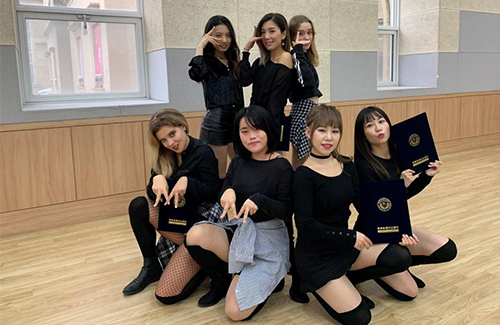 Mandy Wong (黃智雯) will be competing against others who are less than twice her age, but that won’t stop her from being a dancing queen.

Upcoming TVB reality show Dancing for a Reason <一個因去跳舞> follows Mandy as she journeys through South Korea’s K-Pop trainee system to become a member of a girl group. Viewers will get a glimpse of Mandy participating in K-Pop auditions and receiving professional assessments by her coaches. The full package of what it would be like to debut in a Korean girl group will be presented on screen.

Mandy received singing and Korean-style makeup lessons from Global K Center, and attended classes at Hanlim Multi Art School—known for having famous students—to learn about photography, dance, and acting. At 37-years-old, most of Mandy’s classmates are still in their late teens to early 20’s—with the youngest at only 13 years old.

After her training is over, Mandy will compete against the trainees who have starred on Produce 101, a talent competition that produced groups such as IOI and Wanna One.

“It’s been a very interesting experience,” said Mandy. “It’s already been 10 years since my debut, but now I’m starting all over again. It’s like I’ve gone back to 10 years ago, starting from zero. It’s been fun.”

When asked to share about her most unforgettable moments on the show, she said, “You’ll see me without makeup. I originally didn’t want to do that, but my crew insisted and I lost. I did get sick during filming, but I still filmed some footage with my phone. You will all know how I’ll look like when I’m sick!”