Marriage No More? Mandy Wong Rumored to Have Moved Out of Boyfriend’s Home 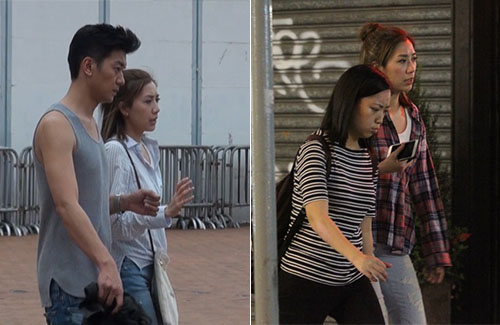 Last year, sources found out that TVB actress Mandy Wong (黃智雯) has moved into her boyfriend’s luxury home, and close friends didn’t find it impossible when it was suggested that Mandy could be the one getting married soon. The 35-year-old and her non-industry boyfriend, Anthony Jim (詹文天), have been dating for over three years.

But it appears that their relationship is on the rocks. Mandy has reportedly moved out of Anthony’s Mid-levels home and has returned to her family’s apartment in San Po Kong. For the past week, reporters followed Mandy around on the film set of her new TVB drama Turn Back the Loan Shark King <反轉貴利王> and noted that Mandy was quiet, laid low, and only talked to her colleagues and staff only when it involved work. When she spotted the reporters, she forced out a smile.

Around 8 p.m., Mandy was spotted in Happy Valley with a female friend. The two roamed the streets to find a place to eat dinner. Mandy’s expression was serious as they talked. Mandy’s mood did not seem to improve after their dinner.