Michelle Ye Cryopreserves Eggs; Can Have Kids in Old Age 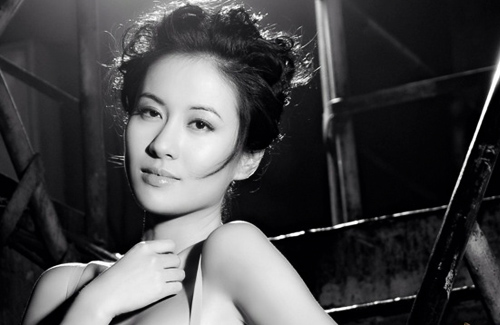 Some women may be concerned that their biological clocks start ticking in their mid-30s, but the same cannot be said for Michelle Ye (葉璇). The 33-year-old has her future all planned out.

“I will not give birth,” said Michelle. “A few years ago I went to the United States and spent hundreds of thousands of RMB to cryopreserve my eggs. That way, I can still have children when I turn 80 years old. I know that, biologically, the best time for a woman to have kids is between 30 and 40 years old; after those years it would be difficult. Sometimes, even younger women can’t just have kids at will. We have a lot of stress in our life nowadays, and the best guarantee is to cryopreserve your eggs, fertilize them, then transfer them to a surrogate mother. With this plan, I am not afraid. [I] can have a lot of children. I can have as much children as I want.”

Michelle, a former Miss Chinese International winner who debuted as a TVB actress in 2000, transferred her career focus to mainland China nearly ten years ago. Mainland China opened a new world of possibilities for her, and in just a few years’ time, Michelle opened her own production studio to produce her own dramas, some which have attained notable popularity throughout the country.

Has Not Found Mr. Right Yet

One of our industry’s brightest bachelorettes, Michelle shared romantic rumors with many costars, most recently with Li Dongxue (李東學), her costar in her latest self-produced drama The Ninth Widow <第9個寡婦>.

“It’s not true,” said Michelle. “None of [my rumors] are true. I’m too busy. I haven’t met anyone yet. Also, as the production’s producer, I cannot encourage office romance. Even if they were interested in dating me, I would say no.”

Michelle expressed that she is in no rush to get married, explaining that she hopes to find a balance in her career and private life. “Many people are getting divorced around 40 years old, and this tends to happen when you get married too soon. I’ll rather cultivate and better myself first now before I go search for my other half. I have my entire life to look for him.”

Michelle, who is working and studying for her EMBA at the same time, listed three qualities she is looking for in a man – talent, aspirations, and wisdom. Asked if money also factors into these demands, she said, “Not really, but honestly, if a man has any of the three qualities I named, he wouldn’t be that poor in the first place.”

Regardless of when Michelle starts her family, she emphasized the importance of her career, firmly stressing that she would be balancing time for both her family and career. “Many parents see their children as they’re everything, and I really respect that belief. However, in my opinion, we shouldn’t see our children as the focal point. I will love them, but I will also leave some room for myself.”

Testing out new waters, Michelle is currently starring in the Hong Kong theater production The Soongs: By Dreams Betrayed <如此長江>, produced by the Hong Kong Repertory Theater. In the production, Michelle stars as renowned Soong May Ling (宋美齡), the educated wife of Chiang Kai Shek (蔣介石). “All three of the Soong sisters are so good at choosing husbands,” Michelle joked. “Hong Kong women should really come to watch the show and learn a few things!”

On speaking about her debut as a theater actress, Michelle said, “On stage, enunciation is important and outtakes are not allowed. I have to memorize my dialogue really well. The production also has a historical background, so my lines are also very long and hard to remember.”

Michelle was originally hesitant about accepting the job, but gave in when her mentor, TVB producer Poon Ka Tak (潘嘉德), strongly encouraged her to take it. “I hope I can challenge new things and increase the depth and knowledge of my craft.”

47 comments to Michelle Ye Cryopreserves Eggs; Can Have Kids in Old Age