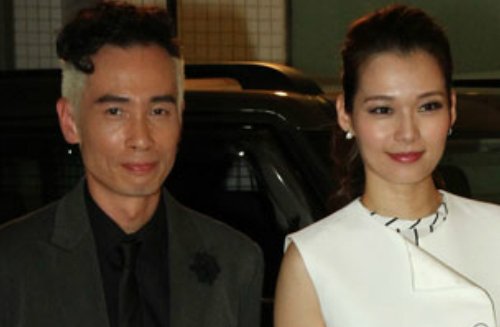 Moses Chan (陳豪) and Koni Lui (呂慧儀) were earlier spotted in Admiralty shooting an outdoors scene for new TVB drama, Trendsetter <潮流教主>. Estimated that filming would be complete in mid-July, Moses expressed he hopes to bring his family out for a vacation, since his wife Aimee Chan (陳茵媺) has been tediously caring for their two sons.

Due to limited time, Moses was unable to bring his sons to theme parks as he had hoped. He expressed, “Children have their own schedules. They need to sleep and do a bunch of other stuff.” When Moses heads home from work, his sons are usually already sleeping. “Sometimes, I get off work early in the morning. I would play with them if I see them. They think I’ll eat breakfast with them, but I told them daddy has to sleep. Their sad looks really hurt me.”

Since viruses have been circulating around lately, Moses is worried about his sons’ health. His elder son was sick earlier and their family took extra caution. Moses shared, “These things can’t be controlled when the children go to school. The only thing we can do is to try to strengthen their immune systems.”

Last year, Moses completed his elder son’s kindergarten registration. When asked if celebrities receive benefits, he laughed and expressed, “Nope, I thought we would too! But I think it’s more fair when everyone is treated the same. [The schools] emphasize the parents’ relationship with their child.”

Moses understands that primary and secondary school enrolment requires pressurizing interviews, so he will consider sending his sons to school overseas in order to broaden their vision. He added that they have finally come up with a Chinese name for their younger son – Chan Ho Fung (陳浩鋒). Moses laughed and revealed it was his fault for dragging on this task, “I kept thinking of historical names and emperor names. It took up so much time!”

15 comments to Moses Chan to Have Sons Educated Overseas?