“My Love from the Planet Meow” Holds Blessing Ceremony 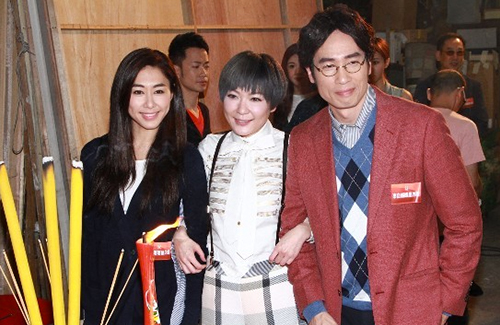 The romantic comedy, which composes of the same actors and crew members from last year’s Ghost of Relativity <鬼同你OT>, stars Kristal as an alien who crash lands on earth and befriends Nancy. Nancy plays a police officer and the wife of Moses, a scientist. They have a 7-year-old daughter together.

Much to her disappointment, Nancy won’t have the opportunity to wear a police costume this time. However, she shared that she will have many action scenes, some which will be quite eye-opening.

“I play a plainclothes cop,” she explained. “But there will be many moments of me going on undercover operations. In one scene I go undercover as a prostitute and I wear a really sexy outfit.”

Nancy said that she wore a skirt so short that she couldn’t sit down, and a tight pushup bra that enhanced her cleavage.

“It really is a very sexy outfit,” said Nancy. “I need to keep up at the gym.”

In regards to her character’s relationship with Kristal, Nancy said their characters would maintain the chemistry they had in Ghost of Relativity. “I’d teach Kristal how to do the catwalk. I think it’ll be very funny!”

Moses, who will be playing a scientist, revealed that he will be shooting the series until May of this year. Although his character is married to Nancy, he is very popular with the ladies and is constantly getting seduced. “What a role!” said Moses. “I don’t know why [TVB] has to do this to me!” However, Moses said he will not have to do bed scenes or intimate scenes on the show.

On his character having a 7-year-old daughter with Nancy, Moses said with a laugh, “I have a one year old and a two year old. This is a chance for me to prepare myself once they get to that age.”

In regards to the establishment of ViuTV, Moses said he’s happy to see more competition on the market and is supportive.