Jackson Wang (王嘉爾), member of the popular K-pop boy group GOT7, is currently seeking medical attention for fatigue and exhaustion.

The Hong Kong native, who was a rap instructor for the Chinese boy group survival show Idol Producer <偶像練習生>, missed out on the show’s season finale on Friday when he passed out shortly before the episode’s filming. He was immediately taken to the hospital for treatment. Some fans managed to take a photo of Jackson, unconscious, on a stretcher as he was being taken to the ambulance.

According to his reports, Jackson fainted due to severe anemia, hyponatremia, and hypokalemia, a result from long-term exhaustion and burnout. Jackson had also been suffering from a prolonged fever for a few days. 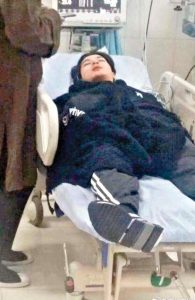 His agency JYP Entertainment has since announced that Jackson will be missing out on his group’s activities in the meantime to recover. It is also possible that Jackson may end up missing GOT7’s upcoming world tour, which will be held in Seoul, Los Angeles, New York, Paris, and Hong Kong, among other cities.

Jackson has a shocking work schedule. In addition to his MC jobs for three different Chinese variety programs, Jackson is also the face of five different endorsements. The 24-year-old has been consistently flying from China back to Korea to accommodate his group’s comeback promotions, as GOT7 had just released their new album Eyes On You last month. Last year, it was revealed that Jackson flew over 115 times, flying every three days. Last month, Jackson flew back and forth 26 times.