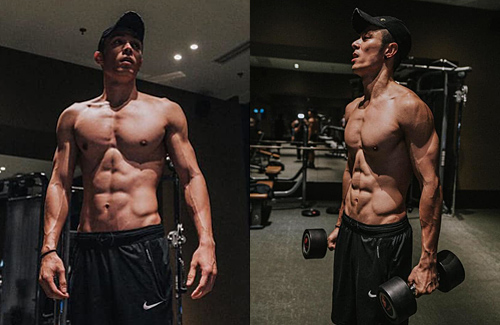 Hong Kong singer/ actor, Pakho Chau (周柏豪), trained intensively for his upcoming concert, “One Step Closer Pakho Live”. Shirtless in the photo, Pakho has bulked up with his six-pack abs and muscular arms. Whether it be his singing or stage presence, Pakho continues to improve for every concert and show a better version of himself to his fans.

With his good looks, sentimental voice and a natural model figure, he is unsurprisingly immediately labelled by fans and media as the male god in the music industry. Though the 33-year-old has been in the industry for more than 10 years, his image and status of a male god never changed despite the emergence of younger artistes.

For his workouts, he shared he would stretch, and then do Muay Thai. This repetitive exercise of throwing a punch and breathing was good focus training, and highly effective in training for abs. Pakho said, “Going to the gym isn’t hard because I’m already so used to it. It’s harder to restrict the diet, but luckily, my wife helps me with that, by slow cooking the food.”

Being a previous basketball youth champion, he is already used to being restrained to a strict diet and training schedule. Pakho had followed a schedule of running, playing basketball and going to the gym every week. He also uploaded a Facebook post noting his diet menu. It mainly consisted of salad, boiled chicken and salmon. He said, “Doing exercise is output and eating is input. So, it’s important to watch what you eat, because what you eat will directly affect your body. For many years, I have stopped eating red meat, and would only eat healthy food.”

7 comments to Pakho Chau Shows Off Abs After Intensive Training