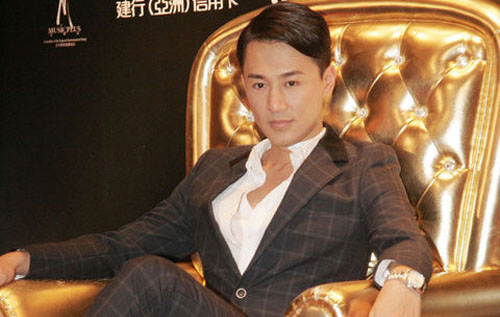 At a press conference yesterday, Raymond Lam Fung announced that his concert will be held on July 29th and 30th at the Hong Kong Coliseum. Raymond sat on a golden thrown and became a “prince” while accompanied by two Caucasian models.

The July concert will have a fire theme and will contain some dark elements. Will Raymond be playing with fire and ice? “The setting will be very hot, but not dangerous. The music will set the tone.” Did Raymond purchase insurance due to the potential fire hazard? “I have always purchased insurance, so I am not afraid of injuries.”

Joey Yung Cho Yi will be a guest performer at Raymond’s concert. During Raymond’s concert last year, the focus was on sexily attired women. He mentioned that this year’s concert will feature the men more prominently. (Will the concert result in a gay flavor?) “We will not give this impression.”

Jayne: I’m sure EEG will put on a good show. Expect this concert to have more sensual moves such as Raymond “touching” his genitals (effects from camera angles) similar to his performance on Super Voice in Concert.