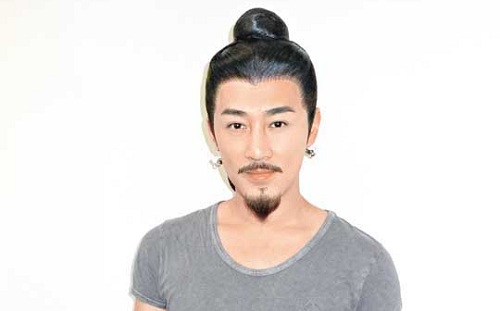 Raymond noted, “Regarding her matters, I have discussed them already. I will not respond to any more questions. It is best for you to ask her directly.”

Although Raymond did not wish to discuss his old love interest, Mavis, he was enthusiastic in speaking about work, “After I finish filming Return to the Three Kingdoms, I will release my new music album. In July, I will hold a concert at the Hong Kong Coliseum. In 2009, my concert theme revolved around water. In 2010, the concert theme was fire. This year’s concert will have a new breakthrough.”

Over the past two years, Raymond’s concert tickets sold extremely well. Was Raymond concerned that the recent exposure of his bed photos upset his fans? Raymond stated, “No, my fans fully support me. I want to thank them very much. I hope everyone can focus on my work. In May, my new TVB series, The Colorful World of Sister Fa <花花世界花家姐> will be broadcast in Hong Kong.”

Since the exposure of bed photos with Mavis, Raymond often appeared haggard. Fortunately, he could immerse himself in the filming of Return to the Three Kingdoms to distract his depressed spirits. Although he filmed at TVB City yesterday, today he will be flying back to his hometown, Xiamen, to attend the 90th Anniversary celebration of Xiamen University. At the same time, Raymond will take the opportunity to visit his family.

Raymond attended primary and middle school in Hong Kong. In 1996, he was admitted to the Department of Architecture at Xiamen University before going to the United States to continue studying. Thus, he was invited as an alumni to guest perform at Xiamen University’s anniversary. Once Xiamen University students learned that Raymond will be making an appearance on campus, many people have posted excited messages on their blogs. Raymond will likely be received by a very enthusiastic crowd tonight.

In fact, Raymond attended Xiamen University’s 85th Anniversary five years ago. At the time, he was very popular among the students. Allegedly, when Raymond was studying at Xiamen University, he was an involved and active student. By singing Jacky Cheung’sLove Is Permanent <愛是永

sequel to Category III film, <3D肉蒲團>, based on the novel, The Carnal Prayer Mat.

In fact, Raymond attended Xiamen University’s 85th Anniversary five years ago. At the time, he was very popular among the students. Allegedly, when Raymond was studying at Xiamen University, he was an involved and active student. By singing Jacky Cheung’s Love Is Permanent <愛是永恒>, Raymond received the top singing award on the school campus. While studying there, he was in the limelight and received numerous love letters from female students. In an interview, Raymond reflected on his university days, “I miss the time when I was studying at Xiamen University. At the time, the Architecture students would turn on the CD player loudly while drawing [architecture] drawings. It was very meaningful.” Jayne: Lucky for those students at Xiamen University, as he is a familiar figure among their anniversary celebrations!