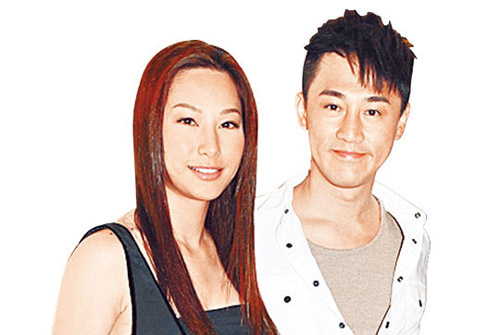 Raymond Lam (林峯) and Kate Tsui (徐子珊) appeared at a promotion event yesterday. Raymond and Charmaine Sheh’s (佘詩曼) new TVB series, My Sister of Eternal Flower <花花世界花家姐> was accused of discriminating against mentally challenged people. Raymond pointed out that Charmaine’s character found a job in the series and was more intelligent than he was in the office. “I did not receive that particular complaint. Perhaps everyone’s perception was different!”

Viewers also complained that Charmaine replicated Roger Kwok’s (郭晉安) performance in Square Pegs <戆夫成龙>. Raymond strongly supported his partner,  “Whether it was the interpretation, body language, or tone of voice, Charmaine’s performance was very, very good. I told myself to deliver a better performance, so that we can balance out! ”

When reporters mentioned that Raymond’s ex-girlfriend, Mavis Pan (潘霜霜), may come to Hong Kong for promotional purposes, Raymond noted that he will not respond. Asked whether Raymond feared that Mavis may further provoke him, he was not willing to answer. Raymond stressed that he was currently focused on preparing for his upcoming concert.

Kate was spotted wearing the same woven bracelet that Ron Ng (吳卓羲) wore. Kate denied the rumors with Ron and noted that she got the bracelet from a master. The bracelet was intended to guard her health and many artists wore the same type of bracelet. Kate stressed that she would only date a man from outside the entertainment industry.  Asked whether she had feelings for Ron, Kate said, “The rumors have been circulating for too long; I have become numb!”

Compiled from The Sun and On.cc

Jayne: Both Raymond and Kate look so tired in the above photo, showing their age a bit more….