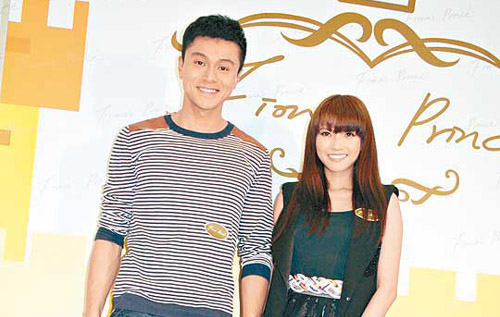 Raymond Wong (黃浩然) and Rosanne Wong (黃婉君) appeared as judges at a modeling contest. New parents, Raymond and Rosanne discussed caring for young babies. Raymond took two months of vacation from TVB and will return to work in August. During that time, Raymond will promote Can’t Buy Me Love <公主嫁到> in Beijing.

Since Raymond will resume work soon, he cherished the opportunity to spend with his son. The day before yesterday was Raymond’s first time giving a bath alone to his 4-month-old child.

Rosanne Wong’s son turned 100-days-old yesterday.  Next week, Rosanne will take her son back to Singapore to celebrate with  her family. Rosanne did not object to her son filming future commercials. I always found the 2R sisters, Rosanne and Race, to be lovely. Too bad their careers did not go further…. Was it just bad timing that they started their careers when Twins was extremely popular?