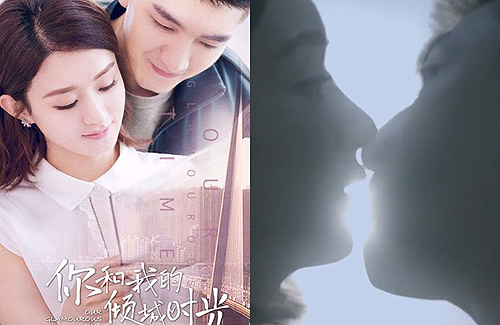 The drama’s romantic story plot has earned praise and propelled its male lead to fame.

Playing a business CEO and the other an entrepreneur who meet and gradually fall in love, Kim Jin and Zanilia’s relationship in the drama has viewers hooked, with their first lip-locking scene on the balcony sending fan excitement up another notch.

Twenty-five-year-old Kim Jin plays Li Zhi Cheng (a homonym for “with sincerity”), a military general who returns to sort out his family business crisis as CEO. Crossing paths with Zanilia’s fashion designer character Lin Qian, sparks fly between the two as they strive alongside one another on their respective business journeys. In the very first episode we see Li’s character heroically rescuing the lady during a gun fight; but it will only be in episode eight that he is recognized by her. Intrigued by their shared experience, the two talk late into the night in the office, when Li finally gathers enough courage to declare his love, asking her upfront, “Are you willing to…be my comrade?”

With his military mindset, Li visualizes and hopes for his relationship to be like that between a commander and adjutant, where “she will be behind me, obeying without resistance”. Who knew that Zanilia’s character would respond smilingly, and declare “I will do anything asked”, further fueling the romantic plot. Just when they were happily talking, she accidentally takes a tumble – the perfect chance for Li to scoop his arm out and pull her closer. The two then lock lips for the first time, and the development takes their relationship to another high point.

As refreshingly different series from Zanilia’s heart-wrenching period drama Princess Angels <楚喬傳>, fans are taking well to the well-paced romantic plot in Our Glamorous Time, and have expressed their preference for Zanilia to take on similar modern and romance-themed dramas in future. Meanwhile, Kim Jin’s intriguing character setup of handsome general-cum-domineering CEO has also kept romance fans glued to their screens.