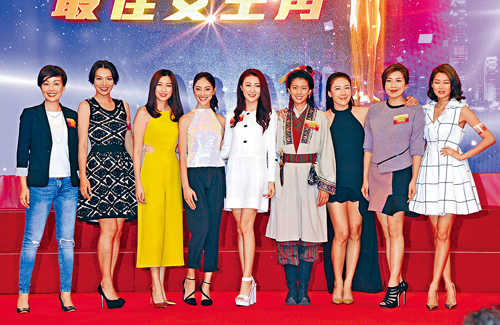 The acting category, which includes best actor and actress, best supporting actor and actress, and most popular male and female character, each have twenty nominations. The director of TVB’s non-drama department, Sandy Yu (余詠珊), expressed that the organization’s purpose of increasing nominations this year was to give more actors an opportunity to shine. This also gives the audience more options to choose when casting their votes.

Although his two dramas Lady Sour <醋娘子> and Lord of Shanghai <梟雄> will be competing for Best Drama, Ron Ng (吳卓羲) is nowhere to be seen in the nominations. The actor opted out of extending his TVB management contract when it was up for renewal this past summer, which may be a reason why he was not selected.

However, Myolie Wu (胡杏兒) and Kate Tsui (徐子珊), both also former TVB artistes, have earned a spot in the Best Actress nominations. Myolie is nominated for her performance in Every Step You Take <陪著你走>, while Kate is nominated for Smooth Talker <以和為貴>, her only TVB drama this year.

Myolie’s two close friends, Elaine Yiu (姚子羚) and Mandy Wong (黃智雯), are both nominated for Best Actress for the first time. When asked if Myolie would be attending this year’s awards show, they both said that they asked Myolie the same question, but has yet to receive a response from her.

Having twenty nominations per award has led rookie actresses like Grace Chan (陳凱琳) and Sisley Choi (蔡思貝) to claim a spot in the Best Actress nominations. Nonetheless, Ghost of Relativity <鬼同你OT> stars Kristal Tin (田蕊妮) and Nancy Wu (胡定欣) remain to be hot favorites to win this year’s TV Queen crown. Limelight Year’s <華麗轉身> Liza Wang (汪明荃), who won Best Actress at the 2015 StarHub TVB Awards, is also getting a lot of buzz.

In the TV King category, Captain of Destiny’s <張保仔> Ruco Chan (陳展鵬) is getting widespread support to win, but he faces extremely tough competition from the three lead actors in Lord of Shanghai. Wayne Lai (黎耀祥), who attended the press launch, praised his competitors and said he does not have confidence to win this year.

Jacqueline Wong (黃心穎) and Tony Hung (洪永城) have received the most nominations, with five for Jacqueline and four for Tony. Tony said he hopes to win Most Improved Male Artiste the most, and will be supporting his Captain of Destiny costar Ruco Chan for Best Actor. Jacqueline, who also had a very successful hosting career in 2015, said she was not expecting herself to receive so many nominations. She expressed her wish to win Most Improved Female Artiste, and is happy to be recognized for her improvements in the last two years.

Vincent Wong (王浩信) is nominated in three categories, including Best Actor and Most Popular Male Character for Brick Slaves <樓奴>; and Best Supporting Actor for With or Without You <東坡家事>. Vincent said he promised to treat the crew of Brick Slaves and With or Without You to a large meal if he was to be nominated. When asked which category he wants to win, Vincent admitted, “Definitely hoping to get some results in Best Supporting.”

The full list of nominees can be seen here.