After being frozen for nearly a year, the blockbuster Qing Dynasty drama Ruyi’s Royal Love in the Palace <如懿传> finally gets a broadcast date.

The period drama, which stars Zhou Xun (周迅) and Wallace Huo (霍建华), is the sequel to the critically acclaimed Empresses in the Palace <后宫·甄嬛传>, which aired in 2011 and starred Sun Li (孙俪), Ada Choi (蔡少芬), and Chen Jianbin (陈建斌). Ruyi is based on the novel Hou Gong Ruyi Zhuan <后宫·如懿传> written by Li Lianzi (流潋紫), and centers on the love story between the Qianlong Emperor and his wife, the Step Empress. 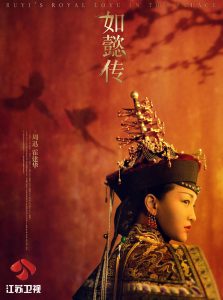 Ruyi was shot in 2016 and was originally slated for a late 2017 release. With the Chinese government’s passing of the “limit historical drama order” in 2017, which places a strict quota on broadcasting historical period dramas on national television, the airing for Ruyi was put in limbo.

With the restart of a new cycle, Dragon TV and Jiangsu TV finally have room to air Ruyi on their stations.

But the good news ends there for Ruyi fans. According to a report, the producers were unable to register the drama for a primetime slot. The show instead would be airing on the weekends this summer. Ruyi, originally produced at 99 episodes, was also cut down to 88 episodes. Rumors say that the massive deletes were because certain content in Ruyi did not comply with “Chinese cultural philosophy”—though it is also possible that the broadcasters had to delete episodes in order fit the show into a weekend slot.

More details of Ruyi’s broadcast date will be announced soon.