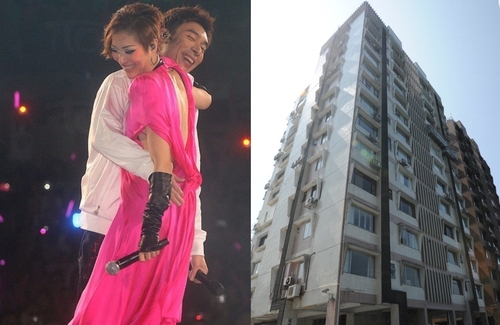 With the exposure of Andy Hui’s (許志安) infidelity and earlier rumors that Sammi Cheng (鄭秀文) moved out of their love nest in Repulse Bay, reporters took the initiative to look at the properties under their names. Since the two are veterans in the entertainment business by now, they both have a lot of wealth and have taken an interest in owning properties. The couple allegedly has more than RMB 400 million worth of properties, but none of them are of joint ownership. It is believed their finances are independent of each other.

In 1990, two years after her debut, Sammi purchased her first unit at South Bay Garden in Repulse Bay for RMB 3.23 million with a current market price of RMB 30 million. After getting a taste of real estate, Sammi became obsessed. Nine years later, she used her company’s name to buy a unit overlooking Victoria Harbour at Trafalgar Court in Tai Hang. It holds a market value of RMB 90 million currently.

As for Andy, he bought his first property in 1993 for more than RMB 5.7 million. But he sold the unit at Lily Mansions Whampoa Garden in Hung Hom for RMB 10.3 million five years later.

Afterward, Andy bought and sold a few more places – some at a loss and others at a profit. Unlike Sammi, he’s not one to be sentimental about properties. However, he does have two long-term units under his name. In November 2010, he purchased a unit at Yukon Court in the Mid-Levels for RMB 24.28 million. Its market value went up to RMB 60 million currently, and the mortgage is fully paid off. However, the mortgage for his other property at Ridge Court in Repulse Bay is not fully paid off yet, but it also has a market value of RMB 60 million at the moment.