By shirley on January 6, 2013 in NEWS, Star Interviews 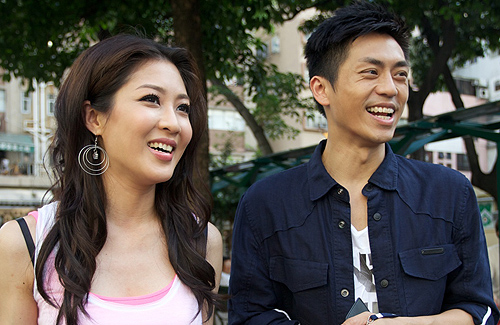 Sammy Leung (森美) and Sharon Chan (陳敏之) became great friends after filming the currently broadcast drama, Friendly Fire <法網狙擊>. Earlier, they accepted an interview, revealing their impressions of each other and sharing how their friendship initiated.

Friendly Fire was Sammy’s first drama since working in the entertainment industry. He entered TVB in 2006 as a host, and only had experience in filming movies. At first, Sammy had thought that he would portray a lawyer in the drama. Since being a host is all about public speaking, a lawyer seemed to be a suitable role for him. When Sammy later learned that he was actually going to play a cop, he was afraid the audience would be unaccustomed to his performance.

Despite his worries, Sammy understood that as a new actor, he has to accept whatever role he is given. Portraying a cop was perhaps not such a bad idea, since he comes from a family with a firefighter, policeman, and a Chinese British soldier. “If I’m not in the entertainment industry,” Sammy remarked, “I think I would have become a policeman.”

Sammy and Sharon did collaborate before in the movie, A Dream Team <翻生奇兵>. But upon working together in Friendly Fire, they admitted that they still felt like strangers at first. Sammy said, “We were leads in the movie. We played a couple and even kissed! However, we were unfamiliar because I have a conservative personality. I’m scared of dating scenes.” Sharon added, “Back then, I always thought Sammy was unhappy. Later, I found out that he’s just a shy guy. He’s really kind, and he even helped draw my cat. Collaborating in a drama is very different from a movie. Everyone has to work with one another for a few months, so good teamwork is important. We have to make sure our characters feel dynamic and realistic.”

Even though it was Sammy’s first time filming for a drama, Sharon expressed that she does not have many things to teach him. “Acting requires a sense of life. There’s no need to teach anything. Instead, Sammy was the one teaching me how to position the gun properly. When we had to film action scenes, he and the team took care of me. I am frail, and I felt like crying every time I heard a loud noise.”

It was Sharon’s sincerity that eventually opened up Sammy’s conservative personality. She revealed, “When filming first began, I would invite everyone out to dinner, but Sammy would always reject my offer, saying that he wants to keep fit. I would then tell him to just get a drink. During work, I bought a lot of snacks for the cast and crew, and I found out that he loves eating dried shredded squid, so I would get that for him each time. Within a month, Sammy opened up to me. He seems cool on the outside, but he’s very warm on the inside. He knows that I love dessert, and he would buy it for me sometimes. Once, he bought a whole box of my favorite corn flavored snack!”

Sammy appeared embarrassed from all the praise. He expressed, “Sharon has an open and hearty personality. Once, she even reminded me to bring my dirty clothes back to TVB for washing.” It was Sharon’s friendliness and caring nature that brought the two close together, and allowed them to deliver great onscreen sparks in Friendly Fire.

After finishing his first drama, Sammy felt like he understands himself better. He found that being able to relax is important for good work. He was touched by the team spirit between colleagues. “I feel like we really have sparks onscreen and off-screen. Everyone put in a lot of time and effort, and truly enjoys the job.”

Sammy shared that he did some research before filming Friendly Fire. He watched other performances of the cast members, such as Michael Tse (謝天華) and Tavia Yeung (楊怡), in order to familiarize himself with their acting techniques. Regarding Sharon, he said, “She is suited to be an actress, because she has a very open personality. If an actress is reserved, it can be very hard. Throughout our collaboration, I felt her emotions pouring out naturally. It helped me become more focused in my role, especially when it comes to the romantic scenes. I’m not a person who’s very good at dating. My wife and I didn’t even experience such romance like in the drama.”

Sharon was quick to add, “At first, it was hard to interact with Sammy on camera. He would change the script, and sometimes I wouldn’t know if I was supposed to laugh. I was scared that it would be too funny. But later, I understood his ways. He felt that his way was more comfortable, and so I followed him through with it. His performance brought impact on everyone, and the results were great. There is a positive response from both our colleagues and netizens.”

Currently taking the role as female lead in the drama, Arrogant Man of Justice <法網囂雄>, Sharon expressed, “Being the female lead is not a form of pressure. I don’t care about the status, because if I fail to do well, then there will be no more chances. Knowing how to act well in the role is the most important. Therefore, I make sure I am well prepared, and that I put in my best efforts each time.”

Last year, Sharon received much criticism for her role as Ha Ying Chun in the drama, Queens and Diamonds of Hearts <東西宮略>. It came as a career blow. “People cursed me online, and they were overly rude. I cried because of it, and had to find someone to enlighten my mood at the time. At first, I took Ha Ying Chun as a challenge, but the audience actually despised the role. I reported this to the company.” She revealed. “Everything is an experience. I had low EQ back then, but now I would carefully think about the paths I’m taking as an actress.”

To-date, Sharon revealed that her favorite roles are Ngai Mei San from Friendly Fire, Wong Hiu Ching from The Charm Beneath <胭脂水粉>, and her role in the upcoming drama, Arrogant Man of Justice.