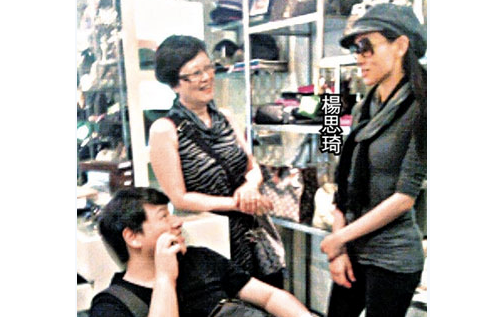 Shirley Yeung ruthlessly dumped boyfriend of nine years, Gregory Lee, and attached herself to Hong Kong national ex-diver, Andy Ng (吴帅). However, despite picking cautiously and carefully among the thousands, Shirley still chose Andy Ng who had yet to repay his debt!

The day before, it was revealed by someone that Andy was still chased by the Small Claims Tribunal Council for tens of thousands owing in arrears since the year 2006! With regards to Shirley falling for the wrong guy, Gregory’s father, Lee Ka Ding, and Gregory’s elder brother, Augustine Lee, joined forces to blast Shirley’s newfound lover.

Lee Ka Ding, “Her eyes didn’t know better and she boarded the wrong pirate ship!” Lee Ka Ding also added that if Andy had ever returned back to Hong Kong in the future, he would definitely be chased by several creditors for his string of debts, “Each guy carry one hammer and he would be knocked dead already!” Augustine ridiculed Andy, “In comparison, of course, my brother is much better!”

The break-up between Shirley and Gregory led to a scolding affair between Shirley and Gregory’s family. After Augustine insisted that Shirley was a “big fat liar,” she followed up and exposed ten big hideous sins of Gregory’s mother and brother, pointing out that they treated her as transparent, threw her belongings carelessly and even accusing Augustine of hitting Gregory. As a result, Augustine was “hopping mad” and wanted to have a face-to-face confrontation with Shirley.

Augustine Scoffed at Shirley For Choosing The Wrong Man

However, just as Shirley and Gregory’s family were in the middle of their heated crossfire, it was uncovered that Shirley had chosen the wrong man. Shirley confessed that she had started dating Andy since May. However, her newfound lover whom she claimed cared for her and was extremely compatible with her, actually has a credibility problem!

Other than borrowing money from his diving team mates, after taking up a job as a diving coach, Andy Ng also borrowed money from his diving students’ parents but not once did he pay them back! The Hong Kong media also unearthed a judgement slip of the Small Claims Tribunal Council. On that slip, it was clearly stated that Andy Ng Sui was chased for payment in 2006 and it was known that the debt owed was tens of thousands. However, the ruling showed that Andy was absent from the hearing! Andy, the defendant, was ordered to pay the plaintiff back the debt owed and on top of that $180 HKD court fees.

Lee Ka Ding Mocked Andy For Hiding From His Creditors

When asked about Shirley’s new boyfriend, Andy Ng, Gregory’s father, Lee Ka Ding, said over the phone, “Ask her to be cautious and look carefully, That person (Andy) has been exposed to be in debt by another guy, he has a bad background, and is even a heartless old groom! Shirley must have been blind then to have chosen him! I can only say that she must have ‘boarded the wrong pirate ship;’ he owed people tens of thousands and fancy him still saying that he wanted to buy a house for Shirley!”

Regarding allegations that Andy Ng borrowed money from quite a few of his students’ parents but never returned their money, Lee Ka Ding laughed coldly after hearing the news. “If he (Andy) turned up, wouldn’t the parents from his entire diving class would turn up as well? If each person carries one hammer, he will be beaten to death already, right?”

Lee Ka Ding continued to ridicule Andy, “Asking someone for a loan but not returning any of it is not an act of a human, I always teach my two sons–gratitude to other people must be repaid; you cannot act like nothing happened. I am poor but even if one is poor, one must have a backbone. You can’t blame Andy for sneaking around and not having the guts to come out. My son is very generous and forthright, often helping out his friends in need.”

Other than Lee Ka Ding, Gregory’s elder brother, Augustine, despised Andy’s act of borrowing but not returning money. Augustine mockingly laughed and said on the phone yesterday, “The act of a man borrowing and not returning any money is not right. If you compare him to my younger brother, Gregory is definitely not such a person. Of course it is obvious that Gregory’s much better.” When asked whether Shirley had chosen the wrong man, Augustine said, “I will not comment.” With regards to the “discriminating evidence” against Shirley that proved she was the one person lying about the break-up, Augustine expressed that the evidence was in Gregory’s hands.

When reporters asked about Shirley’s accusations that she and Augustine treated Shirley poorly, Gregory’s mother, Shih Ming said, “I don’t wish to reply on anything else. There is nothing worth saying anymore. I don’t wish to care about anything; as a human, it is most important not to harm others.” 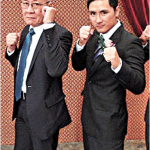 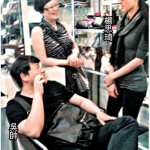 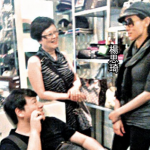 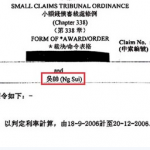 Source: et.21cn.com
This article was translated by Ah K, a Contributing Writer at JayneStars.com.