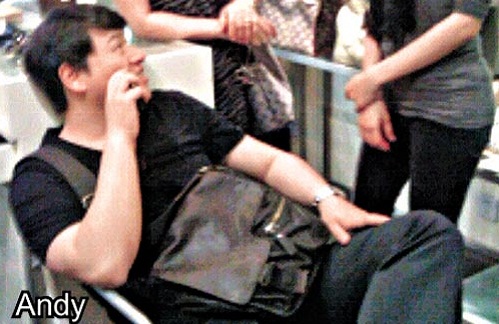 Caption: A photo of Andy Ng circulated, in which he allegedly took a vacation with Shirley Yeung and her mother in May 2011.

In a recent interview, Gregory Lee (李泳豪) admitted that ex-girlfriend, Shirley Yeung (楊思琦), only sent him a text message after she announced to the media about their split. The sudden news was difficult for him to accept. Although Shirley was rumored to have a new lover and widely circulated to be pregnant, dedicated Gregory declared, “If she’s really pregnant with a child, I am willing to marry her and raise this child!”

The speculated cause for the split between Shirley and Gregory was due to the existence of a third party. Shirley dated Lee Ka Ding’s (李家鼎) son, Gregory, for the past nine years and their relationship has always been stable. However, in recent days, Shirley suddenly brought up and announced the breakup all by herself. This greatly shocked Gregory Lee’s family.

There were also rumors that Shirley has fallen for Andy and was even pregnant. There were also indications that new lover Andy Ng (吳帥) had flaunted his victory, in the form of a text message, to Gregory. However, to-date, Shirley has yet to reply to all these rumors.

Just yesterday, the newspaper received a tip-off from a reader, revealing that Andy was actually a member of the Beijing diving team and that he had, on numerous occasions, told his team mates about his secretive matters with Shirley. Allegedly he and Shirley have been dating for two years; their relationship was an open secret in front of their friends. With regards to this accusation, Shirley declined to comment.

Just days before, Shirley’s new lover’s identity was exposed. Allegedly he appeared in Shirley’s new home. However, as it turned out, the published photo was not actually Andy but former Hong Kong national diver, Yu Yue (俞越), who was a good friend of acclaimed Chinese national synchronized Olympic diver, Guo Jingjing (郭晶晶), and already knew Shirley back from their school days at the Hong Kong School/Academy of Education.

Yu Yue professed that he spoke to Shirley over the phone and when asked about innocently being dragged into this scandal, he laughed and said, “It’s okay! I had dinners together with Gregory before; everyone knew what happened!” [indicating that he was on good terms with Gregory and was not the alleged third party].

After breaking up with Gregory, Shirley was rumored to be two months pregnant. The father of her child was believed to be old classmate, Andy Ng. Since the news of her pregnancy broke out, Shirley has avoided responding to the news but at the same time, did not deny them. Discretely dating Andy, rumors of Shirley being a two-timer broke loose. Yesterday, Andy defended Shirley on Weibo, hinting that someone was posing as a weakling and distorting the truth, and urged everyone to wait for the truth to be announced.

Supportive of Shirley and Defensive Against Insults Hurled at Shirley

Yesterday, there were news reports of Gregory receiving his rival-in-love’s open display of victory in the form of a text message. In the message, Andy thanked Gregory for taking good care of Shirley for many years and stated that he will treat her well and love her in the future and that he hoped for Gregory’s blessing for them to be together forever until they were old.

Shirley had also sent a text message to Gregory, asking him to be brave and face the break-up optimistically. Even if she has left him, she will love him forever. The reporter called Shirley yesterday in an attempt to clarify these rumors but Shirley did not respond.

Regarding rife rumors of Shirley being pregnant with alleged third party’s child, someone was displeased and felt indignant for Gregory, thus turning to Weibo to blast Shirley and Andy on their pages.

Asked Everyone to Wait For the Truth to Be Announced

Rumors pointed out that Andy was Shirley’s old classmate and that he was a wealthy businessman from Beijing. Earlier on, Shirley was filming a drama in mainland and “something happened” [likely indicating that she got pregnant]. To-date, Shirley has not denied the rumors about her relationship with Andy or the rumors of her suspected pregnancy.

The reporter had found that a large chunk of Andy’s Weibo tweets were retaliations of others’ Weibo comments about him snatching someone else’s girlfriend. There were also retaliations of Weibo tweets hurling insults at him and Shirley. To-date, Andy deleted insulting Weibo messages left on his page. Yesterday, Andy could not hold his silence anymore and retorted, “Someone has been distorting the truth; everyone will only sympathize the weakling. However, they should wait and only comment after the truth is announced to the public.”

In the afternoon, Andy appeared to have changed his mind and stated that everyone can leave messages on his Weibo page but requested that there should be no personal attacks or use of foul language. This article was translated by Ah K for JayneStars.com

This article was updated on July 7, 2011 to include Andy Ng’s photo.