Strange Occurrences on Set of “Blue Veins”; Is TVB Haunted? 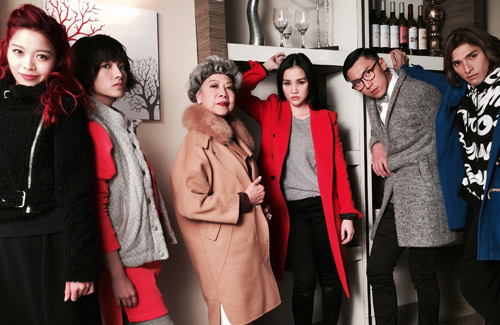 Since filming for vampire drama Blue Veins <殭> started in January, it has been hit with strange occurrences. Mysterious crying was heard and blood stains were discovered on set, reinforcing beliefs that TVB studio may be haunted.

Supernatural occurrences during late-night filming are not new to artistes. However, the haunted suspicions arose again on March 28, when soft crying sounds were heard in the background by the entire cast and crew during a boxing scene. There were also an abundance of outtakes on that day.

Most of the artistes carried on as usual – refusing to believe in supernatural occurrences. To ease the fear, cast member Luk Wing Kuen (陸永) joked, “I wasn’t in the studio that day, so I didn’t hear anything. But I hear strange sounds sometimes – could they be Wong You Nam (黃又南) and my snoring?”

Mysterious blood stains were also found in the men’s restroom the next day. Dispelling the haunted rumors, Luk Wing added, “About the blood stains – there are other people who use fake blood for their make up besides us. Perhaps they belong to other people?”

Also refusing to believe in the paranormal activities, actress Anjaylia Chan (陳嘉寶) commented on the frequent outtakes for Blue Veins. She explained, “A lot of outtakes are very common for action scenes because the director wants to film from different angles to see which effect is the best. I didn’t see anything strange on set. I’m not sure [about the blood in the men’s restroom] because I didn’t go in. Perhaps other actors who use fake blood left them behind!”