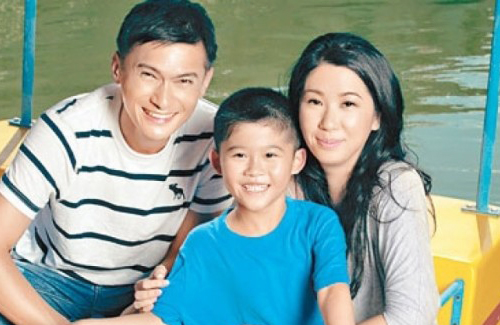 Fifty-year-old Sunny Chan (陳錦鴻) was one of TVB’s leading actors, starring in many popular dramas such as At the Threshold of an Era <創世紀>, Secret of the Heart <天地豪情>. In addition to being a well-rounded and respected actor, Sunny is also a dedicated father. Despite achieving great success in his career, family remains his top priority. After learning of his son’s diagnosis with moderate autism, Sunny took an indefinite hiatus from his acting career in order to care for his son full-time.

Sunny’s son, Edgar Chan (陳駕樺), is already nine years old now. Under the attentive and patient care of his father, Edgar has been able to attend a regular elementary school and is performing well. Currently in fourth grade, Edgar is already developing interest in girls.

Sunny shared, “[Edgar’s] ideal girl is someone who is similar to his mother. He even said that after he gets married, he will have a son and name him ‘Little Tiger’. I even helped him prepare a Valentine’s Day gift! It’s a teddy bear.”

Recently, Sunny made a public appearance as a guest at an event promoting autism awareness.  Sunny shared many of his own experiences and reflected on the lessons he has learned as a parent caring for a child with autism. In order to improve the child’s adaptability, he encouraged parents to respect their children’s wishes and stressed the importance of parents maintaining a calm and peaceful demeanor.