The two-part Chinese television drama The Advisors’ Alliance <大军师司马懿> was a journey. The historical drama, which centers on the life of military strategist Sima Yi, was Wu Xiubo’s (吴秀波) heart and soul. Starring as Sima Yi, Wu Xiubo was also the drama’s producer and production director. Pre-production and filming for the show lasted 333 days, while post-production took an additional 10 months. Wu Xiubo couldn’t return home for almost an entire year. 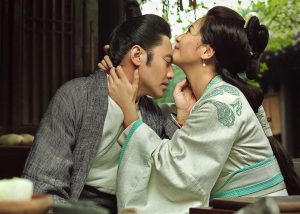 “I spent every single day in those 333 days in the filming studio. If I am to be in debt to my family, allow me to take put another 333 days. I want to use this production to express the differences of humanity, so my children could learn from it.”

The Advisors’ Alliance also stars Tania Liu (刘涛) as Sima Yi’s wife Zhang Chunua, Li Chen (李晨) as Cao Pi, Yu Hewei (于和伟) as Cao Cao, Tang Yixin (唐艺昕) as Guo Zhao, and Janine Chang (張鈞甯) as Bai Lingyun. On his cute romantic interactions with Tania, Wu Xiubo said, “It’s all for the script. In reality, I’m not that interesting. I’m simplistic. My life is never as interesting as the life of my characters in drama.”