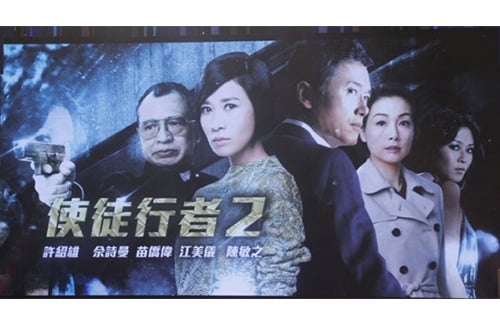 About 190 TVB artistes attended the 2016 TVB Sales Presentation on Tuesday, November 10. The event, which introduces TVB’s upcoming drama and variety program lineup to advertisers, announced 15 up-and-coming television dramas and many brand-new variety programs, including the revival of game show Super Trio <獎門人>. The telecast of the event will air on November 15. At the sales presentation, TVB showed the trailers of 15 proposed and upcoming television dramas scheduled to broadcast in late 2015 and throughout the year of 2016. Each with three dramas under their belt, Nancy Wu (胡定欣), Linda Chung (鐘嘉欣), and Sisley Choi (蔡思貝) are expected to dominate the small screens next year. Moses Chan (陳豪), Ruco Chan (陳展鵬), and Tony Hung (洪永城) have two dramas each.

Benz Hui (許紹雄), Charmaine Sheh (佘詩曼), Michael Miu (苗僑偉), Elena Kong (江美儀), and Sharon Chan (陳敏之) will be returning for the sequel of last year’s hit series, Line Walker <使徒行者>. The web drama was first announced at the Tencent Video V Horizon conference on November 6, and will be TVB’s co-production with Mainland China’s Penguin Pictures. As the drama is still in pre-production stages, the cast has not yet been finalized, and it is unsure if original cast member Raymond Lam (林峯) will also return.

The production that surprised audiences the most, however, was You Who Came from the Kitty Star <來自喵喵星的妳>, a sci-fi drama inspired by the popular Korean drama, My Love from the Star <來自星星的你>. The cast of supernatural drama Ghost of Relativity <鬼同你OT>, including Moses Chan, Nancy Wu, Kristal Tin (田蕊妮) and Vivien Yeo (楊秀惠), are expected to return for You Who Came from the Kitty Star. The sci-fi comedy will be about a cat (Kristal) who turns into a human and meets her owner (Nancy).

Television presenter turned actor Tony Hung will continue to expand his hosting career with the second series of his travelogue program, Not Far But Away <在那遙遠的地方>. Tony visited North Korea in the first series, which won My Favorite TVB Informative Program at the StarHub TVB Awards 2015 in October.

In addition to Tony, actresses Alice Chan (陳煒), Priscilla Wong (黃翠如) and Elena Kong will also get their own, tailor-made variety programs. Alice, who practices culinary art, will be hosting a food program, temporarily titled Alice’s 100 Dishes <陳煒的100道風味>. Priscilla will host No Vacations <世界打工冇假期>, and Elena will host Wives of the World <環球人妻檔案>.

Other up-and-coming programs include Sunday Drama King <Sunday好戲王>, King of Magicians <魔王之王>, I Am Boss 2 <我要做老闆2>, and more.

Rumored to be frozen by TVB due to his refusal to extend his contract, Kenneth Ma (馬國明) disproved these claims when he showed up at the press conference for TVB’s upcoming police procedural ICAC Investigators 2016 <廉政行動2016> a few days ago. Although Kenneth attended the sales presentation, and even stood among the first row of artistes in the group photo, he will not be starring in any of the dramas presented at the event.

Like Kenneth, Wayne Lai (黎耀祥) was also absent in the sales presentation trailers, but he revealed that he will be starring in an upcoming sitcom with his Off Pedder <畢打自己人> costar, Teresa Mo (毛舜筠). The new sitcom will begin principal photography in February, and will take over the time slot of Come Home Love <愛·回家> when it ends its run in March.