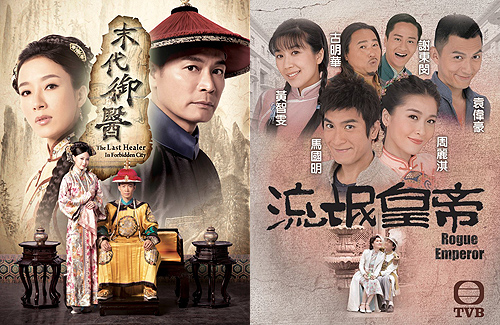 Aside Lord of Shanghai <梟雄>, many of TVB’s series in 2015 were not very well received. Due decline in the station’s ratings, TVB CEO Mark Lee (李寶安) withdrew a total of five series from this year’s broadcast lineup. The series include: No Reserve <巾幗梟雄之諜血長天>, Rogue Emperor <流氓皇帝>, Come With Me <性在有情>, Watch Out Boss <波士早晨>, and The Last Healer in Forbidden City <末代御醫>.

The majority of these series were highly publicized, with The Last Healer in Forbidden City potentially Tavia Yeung’s (楊怡) final series at TVB. No Reserve was also one of Myolie Wu’s (胡杏兒) final productions.

Although it is not fully clear as to why the five dramas were pulled, it is speculated to be due to the politics between TVB upper management. With Catherine Tsang (曾勵珍) losing favor, Mark Lee and Assistant General Manager Felix To (杜之克) decided to scrap the worst five series filmed the last year, although the projects cost over $75 million HKD to produce.

Observing the popularity of Fan Bingbing’s (范冰冰) The Empress of China <武媚娘傳奇> in Hong Kong, Felix To decided to purchase a variety of Mainland series to air during its primetime hours, including Wu Xin: The Monster Killer <無心法師>.

In response to the executive decisions, Rogue Emperor star Kenneth Ma (馬國明) shrugged, “It hasn’t been set in stone yet so I don’t have a response.”

Sharon Chan (陳敏之) on the other hand expressed, “I haven’t heard about this, but I’m the lead actress in [Come With Me]. It would be a shame if it didn’t air. But as an artiste – I can’t help it. I will respect the decisions of the company.”

TAGS: Come With Me, No Reserve, Rogue Emperor, The Last Healer In Forbidden City, Watch Out Boss