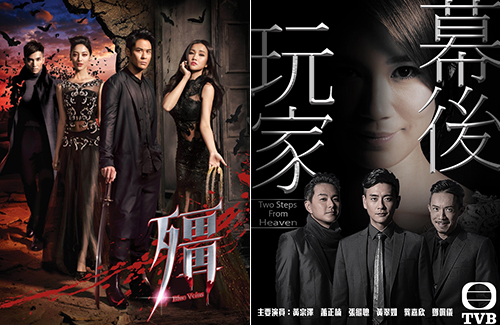 As March 14 is White Day, the press’s attention naturally fell on the real-life couples. Edwin Siu (蕭正楠) and Priscilla Wong (黃翠如) were there to promote Two Steps from Heaven <幕後玩家>, while Kevin Cheng (鄭嘉穎) and Grace Chan (陳凱琳) were present to talk about their first collaboration, Blue Veins <殭>. When this part of the trailer was broadcasted, Bosco joked, “What a confusing show!” Edwin then pretended to be mad and said, “I don’t think it’s confusing, but it makes me unhappy! They told me they wouldn’t include this scene! And I thought the kiss was fake?”

Not wanting Edwin to pursue the matter further, Priscilla said, “Let’s talk about this when we get home!” Lead actor Louis Cheung (張繼聰) mischievously added, “Edwin was supposed to kiss another actress, but that scene was cut.” Edwin turned to Priscilla immediately and said, “No! Even if the director wanted me to, I would never agree to it!” Standing awkwardly next to Edwin, Bosco joked, “Am I a stand-in right now?”

In the backstage interview, Edwin turned serious and clarified that he wasn’t actually mad or jealous. “In the script, I am in love with Priscilla, but my character could also see the chemistry Bosco and Priscilla have with each other. Then I would think she looks more like a couple with him than with me. That part was sad… for my character.”

Edwin said he wasn’t on set to watch Bosco and Priscilla’s kiss. Asking Priscilla why she kissed Bosco behind Edwin’s back, Priscilla responded with a laugh, “I told him about it, but he had an early day!” The reporters suggested Edwin and Priscilla to reenact the scene, to which Edwin said, “But I don’t have a convertible.”

What was Priscilla’s gift to Edwin for White Day? Edwin joked, “That kissing scene [with Bosco]!”

Priscilla is not the only actress Bosco gets to kiss on the show. The actor revealed, “I will have kissing scenes with Moon Lau (劉佩玥) and my wife, Katy Kung (龔嘉欣). There will be a lot of intimate scenes. They like to say I’m filming a romantic action film!”

Bosco added that he was pleasantly surprised at how bold the script is, also expressing that he finds the subject matter of the show unique.

Kevin and Grace’s love story in Blue Veins is less fortunate. In the fantasy show about vampires, Grace, who has unrequited love for Kevin, seeks to become a vampire for him. However, Kevin only has his eyes on her older sister, portrayed by lead actress Kay Tse (謝安琪).

“We really look forward to the show,” said Kevin in the backstage interview. “Everyone, the cast and the crew, worked really hard to make it a success. I do hope that the show can provide something fresh for the audience to see. TVB hasn’t done a show like this before. It’s a fresh collaboration, and there are a lot of action scenes with CG. The style is very different from Captain of Destiny’s <張保仔> CG. I do hope the show will be good entertainment for everyone.”

The actor said he has kissing scenes with both Grace and Kay, but when asked to compare which kiss was more passionate, he said, “What is there to compare? It’s unnecessary. We do whatever that’s in the script.”

Other television dramas promoted at FILMART include:

10 comments to “Two Steps from Heaven”, “Blue Veins” and More at HK FILMART