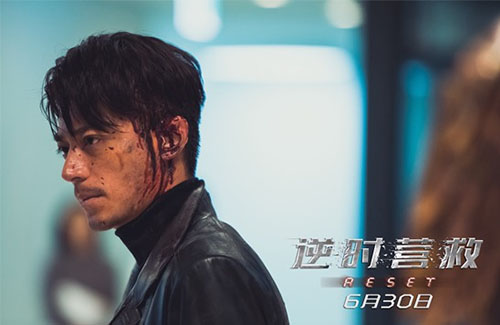 The counting down has begun for Chinese science-fiction thriller RESET <逆时营救>, which will open in theaters everywhere in China on June 30, 2017.

The film, produced by Jackie Chan (成龍), is set in the year 2025, and stars Yang Mi (杨幂) as a single mother who attempts to save her abducted son from a psychotic thief, portrayed by Wallace Huo (霍建華). Yang Mi repeatedly goes back to the same one hour and 50 minutes, replaying her same battles with Wallace.

The latest behind-the-scenes featurette introduces Wallace in the role of Cui Hu, a ruthless and cruel thief who kidnaps Yang Mi’s son in an attempt to gather information. Wallace was attracted to the character’s complicated background, which drew him into accepting the role. “I feel like this role is different from my past roles, and I look forward to seeing everyone with this new image of me.”

It wasn’t easy playing an antagonist to Yang Mi’s Xia Tian, as Wallace is close friends with Yang Mi off-screen. “We’re both very close, so to suddenly feel hatred and vengeance toward each other, to hit each other, wasn’t easy. I couldn’t do it at first, because I was afraid of hurting her.” Action-packed and thrilling, Wallace had to overcome his fear of heights to do the stunts that were required for his role. One scene had Wallace drop from seven stories high, hanging by a rope. Wallace repeated the drop several times. “There was a scene where I had to jump across platforms,” said Wallace. “There was a lot of powder on the floor, and my shoes were slippery. Thinking back, I was actually quite scared.”

In a fight sequence with Yang Mi, where he hangs onto dear life in a scaffolding, Wallace chose not to use wire for the sake of a more realistic look.

“The height was dangerously high, but he did not use wires at all. He’s amazing,” said Yang Mi.

1 comment to Wallace Huo Takes On Villain Role for “RESET”