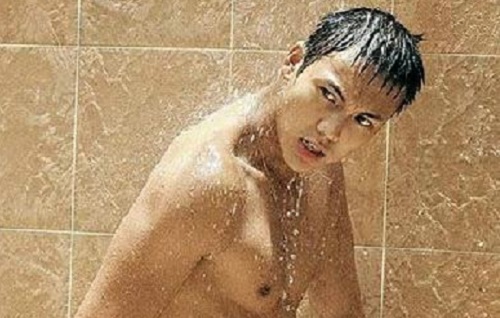 Mr. Lau said that he was generous in rewarding his male subjects in posing for him. He said that many male actors took the bait of money due to their greedy nature. Despite being charged in a court case for indecent groping of 4 men during photo shoots, Mr. Lau has been chattering excitedly that he had photographed thousands of men in more than 100,000 photos for over 40 years! Due to their fit bodies, many Mr. Hong Kong participants became his favorite subjects in recent years.

Mr. Lau boasted that he took photos of William Chan before he had joined EEG. The 62-year-old millionaire’s claim has been denied in a press statement by EEG. William said that he has not been tempted in the past with such dealings. Asked whether he felt that the entertainment industry was full of indecent traps, William said, “I have never been tempted before. If I were, I will politely decline the offer.”

Him Law (羅仲謙) was also reported to be one of Mr. Lau’s subjects in his “muscle men” photo collection. When initial rumors surfaced, Him Law claimed that he did not know Mr. Lau and had never engaged in any unethical activities. Yet, it was revealed that Him had taken photos for Mr. Lau and assisted the police investigations last year.

William was asked whether he thought that Him’s initial statement did not match with what had in fact occurred, making him a hypocrite. William said, “I will not comment. It is inappropriate for me to respond over other people’s matters. I am not bothered by this incident. My girlfriend (Charlene Choi 蔡卓妍) did not ask me about it. People who know me do not belive in this incident!”

Mr. Lau also claimed that Daniel Wu and Stephen Fung had taken topless photos with him after filming Bishonen. Mr. Lau cited their open ABC (American Born Chinese) attitude as the reason for their participation.

Daniel Wu denied that he had taken topless photos for Mr. Lau. In his Weibo blog, Daniel wrote, “I did not take such photos. It’s hard to say if Stephen Fung did though!”

Stephen Fung also joked on his Weibo blog, “I did not take such photos. It’s hard to say whether Daniel Wu did though!”

It appeared that Mr. Lau was a proud man eager to flaunt famous male actors as past “camera conquests.” Did Mr. Lau overstep the line by claiming that William Chan, Daniel Wu and Stephen Fung also willingly modeled for him topless?

Jayne: Glad to hear that Daniel Wu and Stephen Fung took the matter lightly. William’s response skirted around the subject a bit. It was awkward how the press pointedly asked him about Him Law, when many other male actors also denied knowing Mr. Lau, yet had model in photos for him.