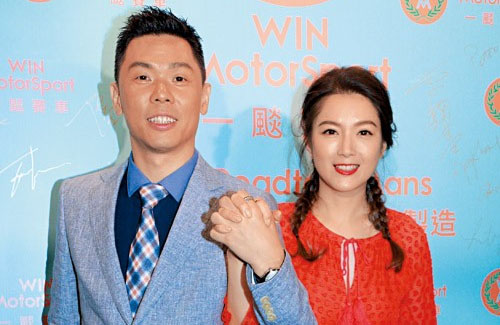 Whether it’s related to family or work, Christine Kuo (苟芸慧) has had a tough life. But after the appearance of William Lok (陸漢洋), who promises take care of Christine forever, all will eventually be well for the former beauty queen.

The 33-year-old had a rough life before she won TVB’s Miss Chinese International Pageant in 2009. Although Christine came from a wealthy family, her father’s failed business and subsequent cancer had put Christine as the sole breadwinner for her younger siblings. She was only 20 years old when her father’s business nearly went bankrupt. After joining the entertainment industry following her MCI win, Christine continued to provide for her family. Her finances were managed by her mother.

Though she had a promising future in entertainment, Christine had to take a few years off from acting to recover from her hypothyroidism, several affecting her career. Though she’s now recovered, Christine became more cautious about her career choices. When her possible relationship with William first broke the headlines, Christine was hesitant, and told the media that she still needed more time to think about it. But after spotting them shopping in Central, and buying matching jewelry pieces, it’s safe to say that the couple are finally together for good. Marriage is definitely already in the talks—William reportedly gave Christine a ring that belonged to his late mother, and Christine herself is ready to tell the world that they’re finally together. At a press conference for the establishment of his own motor team, William walked into the event holding Christine’s hand, confirming their relationship. On their index fingers were two matching rings, a token of their love.

Currently 43 years old, William is the descendant of Malaysian business magnate Loke Yew (陸佑). His father John Lok (陸孝佩) is the founder of John Lok & Partners, a renowned architecture firm. His mother is the creator of the Saint Honore Cake Shop, and his older cousin Christine Loh (陸恭蕙) is the Under Secretary for the Environment of Hong Kong. Though born in Hong Kong, William grew up in Canada, and is an alumnus of the Northeastern University in Boston, Massachusetts, having double majored in finance and marketing.

When William returned to Hong Kong, he became the president of Summit International. He was the chairman of the China Sea Group, and was a member of several board of directors. Passionate for racing, William became a full-time sports car racer seven years ago. He left his businesses for his partners to manage.

According to a source close to William, he is very caring towards Christine, and is serious about their relationship. Besides offering Christine and her family a car and a personal driver, he also provided a place for her family to stay in Residence Bel-Air, a luxury residential development in Cyberport.

The source added, “Christine’s younger brother recently got married and had a baby. They originally lived in a small tenement apartment in Happy Valley, but William helped them find a place near his house in Residence Bel-Air.”