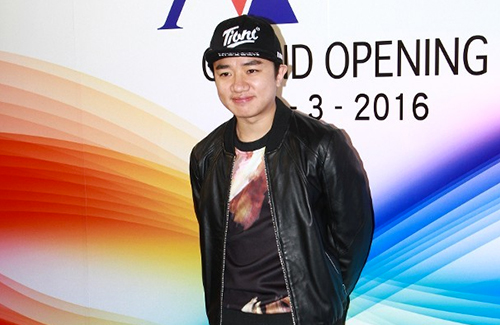 At an event promoting the grand opening of a therapy center, Wong Cho-lam (王祖藍) announced that he will soon be returning to Hong Kong television screens for Inbound Troubles 3, which will begin production at the end of the year. Cho-lam will reprise his roles as helmer, screenwriter, and actor. The original cast members, such as Roger Kwok (郭晉安) and Joey Meng (萬綺雯), are expected to return.

Inbound Troubles <老表，你好嘢！>, a comedy that satirizes the growing tensions between people from Mainland China and Hong Kong, was conceptualized by Cho-lam in 2012. The drama was shot to immediate success after its debut in January 2013, prompting Cho-lam to write a second series, Come On, Cousin <老表，你好hea！>, a year later. Not only did the Inbound Troubles franchise kickstart Cho-lam’s creative career, it also re-introduced Joey Meng, Ivana Wong (王菀之), and Louis Cheung (張繼聰) to the Hong Kong audiences.

“It will feature the cast members from the first two shows,” revealed Cho-lam when he was asked about the cast for Inbound Troubles 3. “There’s going to be a lot of people to take care of!”

Ivana Wong, who married longtime boyfriend Eric So (蘇卓航) last year, was rumored to be pregnant, but they were later debunked. Commenting that these rumors might come true by the time Inbound Troubles 3 start production, Cho-lam said the script will accommodate Ivana’s condition.

“The best part of [Inbound Troubles 3] is that it will talk about our lives after marriage,” said Cho-lam. “So even if Ivana does get pregnant, I will find a way to work it into the script.”

At the news of Tavia Yeung (楊怡) and Him Law’s (羅仲謙) secret wedding in England, Cho-lam said with a laugh, “It’s been a very flourishing two years for the TV industry. Everyone [is getting married] one by one. Nowadays, staying underground doesn’t seem to be the thing anymore. Fans are becoming more accepting of their idols dating and getting married.”

With TVB fadans like Myolie Wu (胡杏兒), Linda Chung (鍾嘉欣), and now Tavia Yeung getting married, it is said that there will be a shortages of fadans in the future. Cho-lam disagrees.

“There is still the younger generation, like Sisley Choi (蔡思貝) and Grace Chan (陳凱琳). They are quite exceptional. I’m sure a new generation is coming up. I don’t think they will get married anytime soon.” (That’s hard to say for Grace!) “You’re going to have to ask Kevin Cheng (鄭嘉穎) about that!”