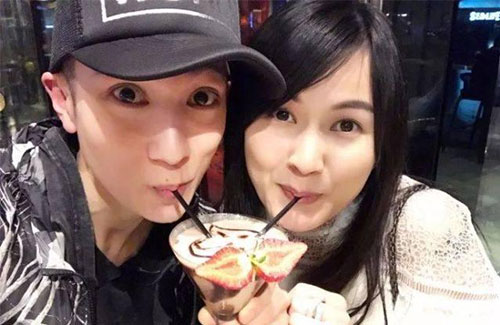 On February 14, Valentine’s Day, the extremely private Wu Chun finally caved in to fan requests and shared two pictures of his family. The former Fahrenheit (飛輪海) member wrote, “I know everyone are curious… fine… we’ll open up! Today is our 22nd Valentine’s Day together. She is the partner who has always been working hard behind my back… [I am] grateful to receive so many blessings from everyone. I wish for everyone to be happy also!” Liying is Wu Chun’s childhood sweetheart, and they have been together for over 22 years. In an interview, Wu Chun shared that he met his wife when they were both 15 years old. At the time, Wu Chun just finished middle school, and he wanted to have a girlfriend. He said, “I was a shy kid, yet I had a crush on her. I wanted to ask her out, but I didn’t know how to do it. I was too afraid to call her, so I shut myself in the bedroom, with all the lights turned off, and hid myself in my bed covers, pondering on how to do it. I wrote down all my problems on a piece of paper. After about two to three hours, I finally found the courage to call her.”

His family already had plans for him to study abroad before he started dating Liying. Right after their relationship started, Wu Chun moved to Australia for school. It was a long month for Wu Chun.

“I got extremely homesick, and I missed her so much. After about a month, I moved back home,” he said. “I guess you can say I gave up my education for her.”

Celebrity romances tend to not last very long, and with the amount of cheating scandals in the industry, Wu Chun was asked about his thoughts on how to preserve a relationship. He said, “There isn’t a single relationship where 30 years later you would still get the spark you felt when you first dated. To break up with your other half in order to chase after that spark is a very silly thing to do. In the end, a relationship is a responsibility.”