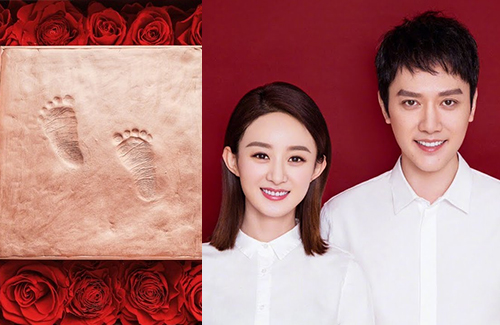 On March 8th, Chinese actor William Feng (冯绍峰) announced that his wife, actress Zanilia Zhao (赵丽颖), has given birth to a baby boy. While the couple have been receiving many congratulating messages from fans and friends alike, many netizens have also left comments criticizing The Story of Minglan <知否知否应是绿肥红瘦> stars for lying about the pregnancy.

William and Zanilia started dating soon after collaborating in the 2018 Lunar New Year film The Monkey King 3 <西游记女儿国>, which was shot in 2017. Pregnancy rumors started popping up in August 2018, coincidentally after Zanilia announced that she would be taking a short hiatus from acting.

When the rumor first broke out, Zanilia’s reps flat-out denied the pregnancy, but the rumor mill did not stop spinning. From August to September 2018, four more “insider” reports about Zanilia’s pregnancy started to spread, pushing Zanilia to react on social media. She vented out her frustration, expressing that she did not appreciate the gossip about her.

Soon after confirming her relationship and subsequent marriage to William in October 2018, a new rumor about Zanilia’s pregnancy came about, which claimed that her due date would be in March 2019. Zanilia wrote an angry post on Weibo to call out the media for “inventing stories” about her life. Many netizens and fans took that as Zanilia’s way of denying pregnancy.

It wasn’t until January 1, 2019, when William and Zanilia finally confirmed that they were expecting. William had, at the time, attempted to debunk the rumor that Zanilia would be due March 2019, saying that that would be too soon.

But now that their son is born, it matches with the original claim that Zanilia had been pregnant since August 2018. Many netizens have expressed their frustration at the couple for repeatedly lying about the pregnancy, but fans were quick to defend, explaining that it is common for couples to lie about pregnancies before the end of the first trimester.