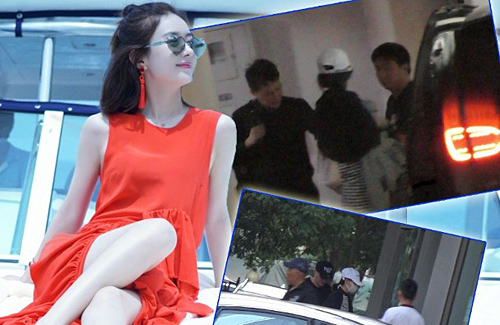 Thirty-year-old Zanilia Zhao (趙麗穎) is one of Mainland China’s most popular actresses. Perhaps overworked, she recently announced that she will be taking a hiatus to rest. The sudden hiatus at the peak of her career, however, has sent fans into a frenzy. They were quick to speculate that Zanilia may be shying away from the public eye due to her unexpected pregnancy with rumored boyfriend, William Feng (馮紹峰).

Dating speculations between William and Zanilia began after the duo collaborated in the fantasy film, The Monkey King 3 <西游记·女儿国>, in 2017. The couple was recently spotted out in the public, where William was seen carefully helping Zanilia into the car. She was wearing bulky clothing and discreetly wore a face mask.

When asked about Zanilia’s alleged three-month pregnancy, her agency responded adamantly, “There is no such thing.” Zanilia herself also posted a photo on social media in response to the speculation. In the photo, she was wearing a long, baby blue dress and was doing the splits. She humorously wrote, “I don’t know what to say. I’ll just do the splits for everyone.” Perhaps this was Zanilia’s way of proving to the public that she is not expecting.

Michelle Ye Urges the Public to Not Eat Desert Locusts