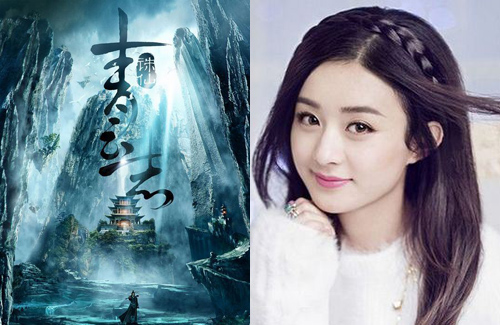 The production team behind new and highly anticipated Mainland Chinese period drama, Legend of Chusen <诛仙-青雲志> has revealed that the cast will include Andy Yang (楊紫), Chinese boyband TFBoys, Qin Junjie (秦俊杰), Cheng Yi (成毅), Tang Yiqin (唐藝昕) and Mao Zijun (茅子俊). Speculation over the leads of the dramas was kept under wraps until recently.

The source revealed, “It is uncertain when Yifeng will join the filming, probably earliest in January next year. It all depends on whether and when he can free up his schedule. As for the female lead, there have been negotiations held with Zanilia.”

The source subsequently posted an update, “Zanilia has been confirmed for the female lead role. She was only approached recently. Angelababy was being considered for the role before that.”

In response, many fans expressed approval of the choice of actress and posted comments like, “Yay! I’m so happy! If it’s [Zanilia Zhao], I can stop worrying now.” and “That’s great!”

Some fans were however more critical and remarked, “Why is she always playing this type of roles? I’m getting a little bit tired of seeing her all the time!” There were also netizens who maintained a more neutral position and commented, “Hang on, let’s stay calm, fellow fans. We like both Liying and Yifeng. We should support their collaboration!”