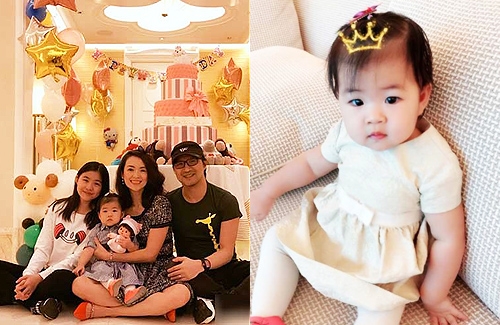 In early 2015, 45-year-old rock musician Wang Feng (汪峰) proposed to Zhang Ziyi (章子怡) on her 36th birthday, after the couple had been dating for two years. The proposal was not the only surprise, as the couple later announced that they were expecting. Last year, Ziyi gave birth to a healthy baby girl, whom they named Wang Xingxing (汪醒醒). December 27 marked the first birthday of Xingxing. Along with Wang Feng’s daughter from his previous marriage, the family of four celebrated the occasion with festive, pink-themed décor and a four-tiered fondant cake. The 37-year-old actress shared a photo of the family celebration on Weibo and wrote, “My little Xingxing is one year old today! I am grateful that this child has allowed me to feel a mother’s happiness. Everything around me is so beautiful!”