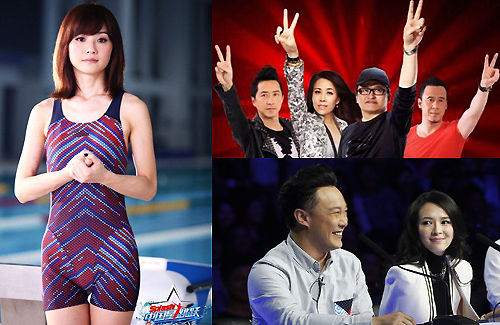 With the surging popularity of mainland television programs like last year’s The Voice of China <中國好聲音> and this year’s I Am a Singer <我是歌手>, celebrity appearances and variety shows are becoming increasingly intertwined. When did star power turn into the main force behind these shows? QQ Entertainment reported on the inside scoop on the recent trend in mainland variety shows.

After Super Girl <超級女聲> drew widespread interest among viewers and netizens, mainland Chinese talent shows started to highlight their focus on “ordinary” participants. Celebrities, who had previously dominated variety shows, gradually stepped out of the limelight. However, they have recently begun to make a comeback, due to the oversaturation of the television industry.

“Domestic programs have always been like a swarm of bees,” said well-known television critic Li Xing (李幸). “Whenever something becomes popular, many homogenous shows will immediately spring up. The final outcome will be visual fatigue on the audience’s part.”

Nowhere is this homogeneity more apparent than with China’s profusion of singing competitions. The Voice of China, which premiered in July 2012, was among the first in this trend. With its all-star judging panel consisting of Taiwanese singer Harlem Yu (庾澄慶) and mainland Chinese singers Na Ying (那英), Liu Huan (劉歡), and Yang Kun (楊坤), The Voice of China launched the careers of newcomers like Momo Wu (吳莫愁) and Summer (吉克隽逸).

Following The Voice of China came I Am a Singer, which mostly featured established but lesser-known artists, such as singing duo Yu Quan (羽·泉) and Taiwanese singer Aska Yang (楊宗緯). The Chinese version of The X Factor <中國最強音> also premiered just last month, and Chinese Idol <中國夢之聲>, the Chinese counterpart of American Idol, is slated to premiere on May 19.

According to Li Xing, this homogeneity has left television channels scrambling for a way to stand out. As a result, they have locked onto star power – and the driving force of celebrity consumption – as their saving grace.

Zhejiang Satellite TV’s head of publicity, Wang Zhengyu (王徵宇), agrees with the use of the term “celebrity consumption” to describe the current state of China’s variety shows. “Celebrities can spur the industry’s approval of these shows,” he said. “This is a classic celebrity effect, but I believe that [it] isn’t the best way of maintaining a show’s vitality.”

Wang also attributed the “celebrity consumption” trend to the variety shows’ ties to overseas television: “Strictly speaking, mainland China doesn’t have a sound variety show format. The programs have all been introduced from overseas. That is to say, all of this is closely related to growing overseas trends. Whatever trends there are overseas will also affect us.”

The link between overseas influences and celebrity consumption is evident when one looks at the many Chinese renditions of overseas shows. Liu Xichen (劉熙晨), who introduced shows like Strictly Come Dancing <舞動奇蹟> and Mr. Mic <挑戰麥克風>, shared that celebrity reality shows are a key component of television in Western countries, as well as Korea. “If you look at Korea, with We Got Married <우리 결혼했어요> and the currently red-hot Running Man <런닝맨>, which one isn’t an example of celebrity consumption?” he asked. “The program team doesn’t care how much you consume. After all, the more the celebrities suffer, the more the viewers buy into it.”

Despite the overwhelming permeation of celebrities in variety shows, the relationship persists due to mutual demand and benefit: celebrities provide the shows with promotional opportunities, and the shows give celebrities the chance to build up their public image. Celebrities who are lesser known, second-string, or simply no longer popular are willing to put themselves forth for consumption, provided they are rewarded well for their sacrifice.

The current state of the domestic television market shows that more than 30,000 episodes’ worth of programs has been produced in the past two years, but that each year, television channels can air only 3,000 episodes during prime-time slots. Even when a project wraps up filming, there is no way to ensure that it will ever see the light. The music industry is in a similar crisis: more newcomers debut every year, and overseas artists are targeting the Chinese market more heavily, thus crowding out domestic singers.

As a result, artists are turning to variety shows to guarantee more exposure, and to maintain their public image and worth. Even when they have no new releases to promote, they rush to participate in variety shows simply to remain in the public eye.

Variety shows are also alluring due to their sky-high monetary rewards. Diving shows like Splash! <中國星跳躍> and Stars in Danger: The High Dive <星跳水立方> are noted for their high paychecks, which are doled out based on the number of dives a celebrity performs. For example, singer Han Geng (韓庚) reportedly netted one million RMB with a single dive. Even lesser-known artists can grab 100,000 RMB for participating.

However, industry insider Wang Xiaoyu (王小魚) is skeptical of these “big-name” celebrity appearances. “In the current entertainment environment, stars who are truly popular don’t have the time to do things like this,” he said. “[They] have to film so many projects in one year. How can they have time in their schedule, when their free time is all spent on promotions, fashion shows, and numerous business endorsements?”