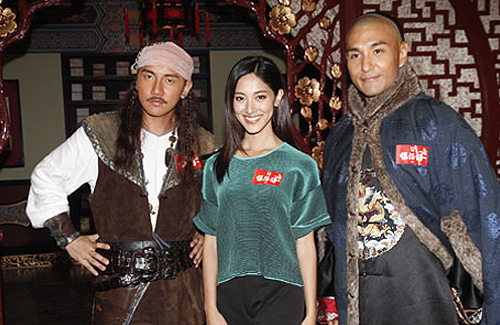 Raymond Wong (黃浩然) was recently diagnosed with Behcet’s disease, an autoimmune disease that results in sores in the mouth and inflammation throughout the body. Suffering from constant high fevers since August, Raymond has been seeing various doctors to manage his health condition. Forced to step down from the lead role of time-traveling drama, Cheung Po Tsai <張保仔>, Raymond’s absence was missed by his colleagues.

When it became clear that Raymond was too ill to resume work anytime soon, TVB announced this week that Tony Hung (洪永城) would star in the pirate role instead. The staff scrambled to make last-minute changes to the script due to the casting change. As Cheung Po Tsai would be Tony’s first period drama, he spent extra time to study the script and memorize his dialogue carefully. Appearing at the blessing ceremony with curly hair and braids, Tony laughed, “My head is only shaved halfway; it has a very cooling effect.”

Ruco Chan (陳展鵬) is confident that he will work well with Tony as this will be their third collaboration. Ruco heard from producer Leung Choi Yuen (梁材遠) that Raymond’s health is taking a turn for the better, as he can now consume solid food at the hospital. Grace Chan (陳凱琳) said, “We’re all very worried about Raymond. Some things are destined. It may be a good thing for him to get good rest and for his body to recover.”

As the blessing ceremony for Cheung Po Tsai took place on September 12, which coincided with Leslie Cheung‘s (張國榮) birthday, Ruco was asked if he had paid respects to the deceased legend. Ruco said, “Leslie was my idol and I sang his songs when I joined a singing competition. I always wanted to pay my respects to him.”