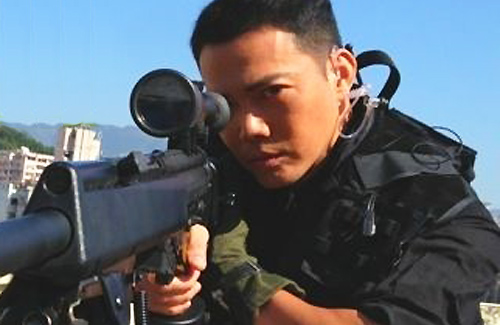 While the rest of Hong Kong are gathered around Victoria Harbor to celebrate New Year’s Eve like rock stars, Michael Tse (謝天華) is left alone on the top of a roof in the cold, shooting for an action sequence for the upcoming action drama, Sniper Attack 2013 <神槍狙擊2013>.

The action sequence had Michael, who plays an SDU sniper, aiming his sniper rifle at a running criminal. New Year’s Eve was Hong Kong’s coldest day of the year, and Michael, whose costume consisted of only several thin layers, exclaimed that he nearly froze to death during the shoot.

“It was about 7 to 8 degrees [Celsius]  that day. It was also very windy on top of the roof. I had very thin layers on, so my hands could not stop shaking throughout the entire sequence,” said Michael.

When asked about his New Year’s hopes and wishes, Michael expressed that he hopes his families and friends will have good health, and that he will partake in more high-quality productions in the future.

Sammy Leung Has a Leg Fetish?

A Hong Kong tabloid magazine reported yesterday that Michael’s Friendly Fire costar, Sammy Leung (森美), reportedly had a leg fetish, and his costars, including Tavia Yeung (楊怡), Sharon Chan (陳敏之), and Christine Kuo (苟芸慧), were regular victims of his perversions. The magazine claimed that Sammy enjoyed filming their legs with his camera phone.

Sammy immediately denied the reports once they were released. Sammy exclaimed that he was furious with the claims, but found the reports rather hilarious. “In my lifetime, I have taken over a thousand pictures, but only seven of them were of women’s legs. Reason is because I found them beautiful, and wanted to save the moment. I capture men’s legs too. I even take pictures of my own legs! I will always let the parties involved know; therefore, I am not invading their privacy either. But I am really not afraid with these pervert reports.”

13 comments to Michael Tse Catches Criminals in the Cold