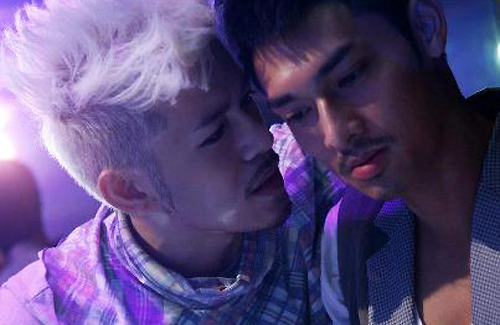 Above: Sammy Shum and Kelvin Kwan in “Lan Kwai Fong 2”.
Lan Kwai Fong 2 <喜愛夜蒲2> star, Sammy Shum (沈震軒), has recently been announced to be contending for the Best New Performer award at the 32nd Hong Kong Film Awards, which will be held in the Hong Kong Cultural Center on Saturday, April 13.
Sammy will replace the nomination of Love in the Buff <春嬌與志明> star, June Lam (林兆霞), for Best New Performer. As June has had prior acting experience in a movie before Love in the Buff, she became disqualified to run for the award.
The nominees for the 32nd Hong Kong Film Awards were announced on Tuesday, February 5. The Best New Performer nominees were announced to be Zhang Lanxin (張藍心) from CZ12 <十二生肖>, Feng Wenjuan (馮文娟) from The Last Tycoon <大上海>, Jayden Yuan (袁曉超) from Tai Chi Zero <太極1從零開始>, Tsui Ka Kit (徐家傑) from Cold War <寒戰>, and June Lam from Love in the Buff.
Hours after the announcement, the HKFA organizers announced that June has been disqualified from her nomination. The Best New Performer award required all nominees to be nominated for their first film. June, however, has already had previous acting experience in a movie in 2011.
Days later, the HKFA organizers announced that Lan Kwai Fong 2 star and TVB actor, Sammy Shum, to replace June’s nomination. In a phone interview, the shocked Sammy exclaimed that he was unprepared to receive such a pleasant surprise. The actor excitedly said, “I never thought I would get nominated! [Lan Kwai Fong 2] is a movie for youths, and it is also a commercial film. I have earned much just from knowing that people have seen my hard work!”
Sammy also does not mind being a replacement. “I am just very happy and honored to get nominated, although my main reason for being an actor was not because of winning any awards.”
Asked if Sammy has hopes in winning, Sammy expressed that he will not keep his hopes too high. “It really depends on luck. I will still try my best.”
Although a managed TVB artist, Sammy stated that he will focus on films in the coming months.
Source: Sina.com
This article is written by Addy for JayneStars.com.