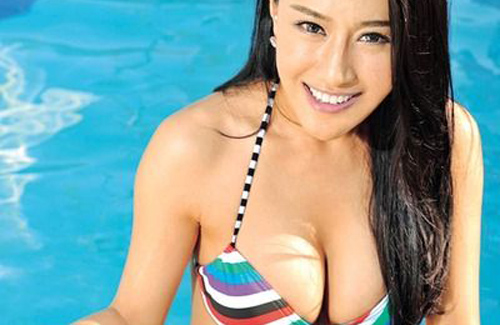 Seventeen nude photos of actress, Angelina Zhang (張暖雅), circulated rapidly in online forums on July 31. The photos were unpixelated and featured Angelina sprawled in bed and taking a shower, revealing her nether regions. Angelina unabashedly admitted that she took the photos in 2009, “They were artistic photos!”

Angelina’s face and body figure appear drastically different from her current 34D shape. Although the photos were obviously taken prior to her cosmetic enhancements, her trademark tattoo on her lower waist was apparent and helped identify her as the naked woman in the pictures.

Born in Weihai, China, Angelina appeared in Hong Kong sex films Lan Kwai Fong 2 <喜爱夜蒲2> and Due West: Our Sex Journey <一路向西>.  Ending her disputed management contract with AEG, Angelina suspects that her former manager, Peter, may have leaked her nude photos to the public.

When Angelina was notified by reporters that her nude photos were released online, she asked shockingly, “Can you describe them in detail? Do the photos only feature myself?” After being assured this was the case, Angelina admitted that she had posed naked for a Hong Kong photographer friend in 2009. “I’m upright and open; I took the artistic photos.”

With the photos featuring Angelina in a bedroom setting, was she concerned that others may interpret the photos as taken under an unethical sexual encounter? Angelina crossed off speculations that she would have sex for money, “I have higher education and know English; why would I be a prostitute? My achievements today are a result of my own efforts. If I were a prostitute, why would I work so hard?”

Angelina revealed that she had handed over her nude photos to her former manager, Peter, two years ago when she signed with AEG. With Peter holding on to copies of the photos, she implied that he had leaked them to the public.

Peter responded angrily, “It’s slander; I want legal action. I want to sue her [Angelina Zhang] for double crossing us. Several months before ending her management contract, she accepted some side jobs. I have all the evidence that she had changed the corporate email to her own. The costs involved are approximately $500,000 to $600,000 HKD. We will sue her for breaching the contract.”  Peter also said he was not the person who had leaked Angelina’s nude photos online.

Angelina denied that she had released the photos to generate publicity for herself. “I have already signed onto many [promotional] appearances. I will not let this type of trash affect clients’ interests.”

The photo scandal also brought to light that Angelina has secretly married Due West: Our Sex Journey director Mark Wu (胡耀輝). Mark said that the photo leakage will be investigated by the police and followed up by their lawyer.