3 Actresses Who Don’t Think Marriage is About Money 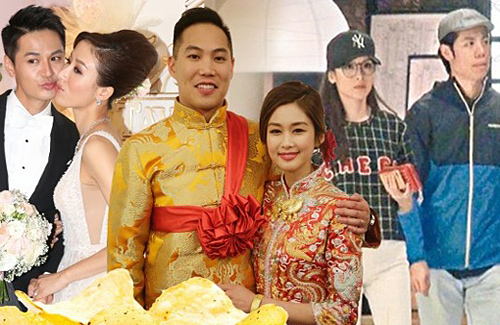 Many female celebrities marry for money, but these three actresses chose love first. Eliza Sam (岑麗香), Tavia Yeung (楊怡), and Ali Lee (李佳芯) chose partners with less successful careers than theirs. By defeating traditional notions and expectations that women need to marry or date men who are richer, more powerful and intelligent than them to be considered as a good match, these women are nevertheless secure and happy in their relationships.

While working for TVB, Eliza was extremely busy with filming dramas, so she was not unable to spend Valentine’s Day and celebrate her first year of dating anniversary with Canadian-Chinese boyfriend, Joshua Ngo. To commemorate their special day, Joshua sent two bags of specialty chips from Canada as their anniversary present. Known for her good-nature and frugality, Eliza was satisfied with the efforts Joshua made, rather than the actual present itself. After all, sincerity is the most important instead of the cost of the gift. The couple got married in 2016 and Joshua moved to Hong Kong to accommodate Eliza’s acting career.

Tavia and Him Law (羅仲謙) began dating after meeting on the set of The Hippocratic Crush <On Call 36小時>. Though Tavia is his senior and had won the Best Actress in 2012, they both did not care about other people’s judgement on how she is more successful than him. After dating for four years, Tavia and Him secretly got married in England in 2016, and are enjoying a lovely married life. Tavia said she does not care for material possessions, and emphasized, “I can eat anything, and I don’t need fancy cars. What’s most important is Him being by my side and holding my hand as we grow old.”

Ali is currently heavily promoted by TVB. Earning significant praises for her performance in Who Wants a Baby <BB来了>, Ali is one of the strong contenders for this year’s Best Actress at the TVB Anniversary Awards. Although often mistaken to be married because of her fantastic portrayal of a wife and a new mother in the drama, Ali is unmarried, but is currently in a long-term relationship with ViuTV Host, Danny Chan (陳炳銓). The couple is living together and speculated to have marriage plans soon. Ali does not mind that he is less popular than her, as they are often photographed on simple dates and activities such as exercising and walking their dogs together.