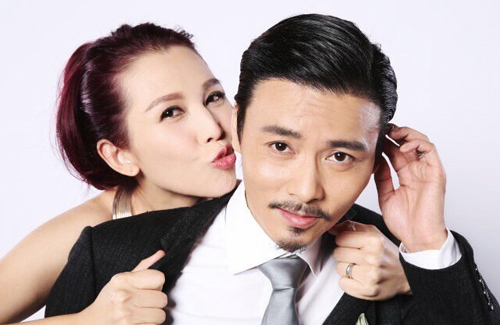 In a recent interview with QQ Entertainment, actress Ada Choi (蔡少芬) showered praises on her husband, actor Max Zhang (張晉), who won Best Supporting Actor at the Hong Kong Film Awards last year. The husband and wife duo will be appearing on the new weekly reality show, Fight For Her <為她而戰>.

When Ada and Max were first approached about participating in Fight For Her, a mainland Chinese reality show that pits celebrity couples against each other in various games and challenges, Ada was hesitant to accept the proposal. Though she was very interested in appearing on the show, she knew that her husband was concentrating on filming Ip Man 3 <葉問3>.

However, Max decided to make an effort for Ada’s sake and participate in Fight For Her, even though doing so would make his schedule even busier and leave him with less energy. As a result, fans have been able to witness the couple’s devotion to one another.

“Everything about Max Is Good!”

Ada has long been known for her adoration of Max. When he won his Best Supporting Actor Award, she was overcome with tears of joy. She even proclaimed, “Everything about him is good!”

Being elevated on such a high pedestal has understandably led to much pressure for Max, who humbly responded, “How could I be so good? I’m covered with shortcomings, but in her eyes, all of my shortcomings are advantages.”

It could be said that Max has gotten even better after knowing Ada, since her liveliness and extroversion has rubbed off on him. Moreover, Max shared that before he met Ada, he did not know how to be romantic. But thanks to a suggestion from his older daughter, who often says she wants to send flowers to her mother, Max will sometimes surprise his wife with a fresh bouquet.

Max and Ada are currently enjoying life with their two young daughters and have no plans to give birth to a third child. “If we have another one, who would raise him or her?” asked Max. “Right now, we’re not thinking about this issue.”